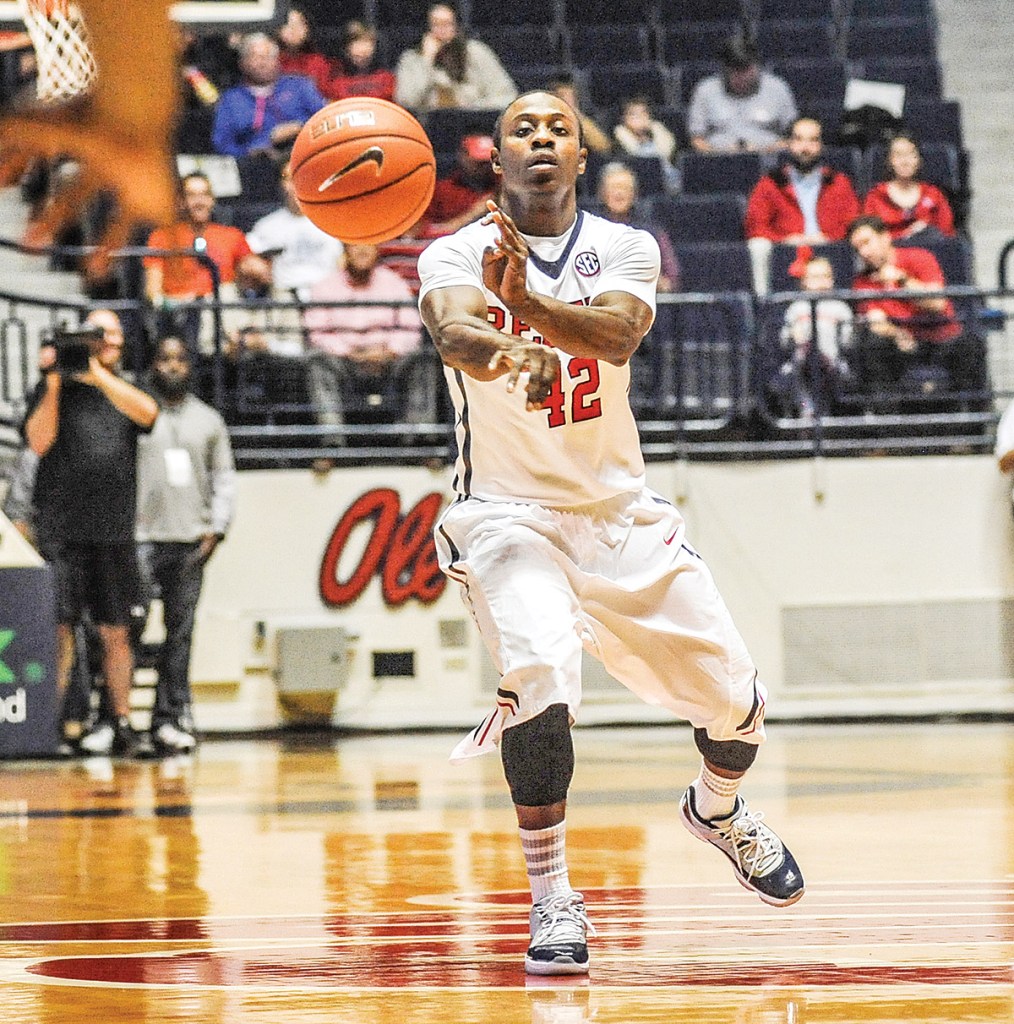 Ole Miss’ Stefan Moody (42) has given the Rebels some stability at the point since moving there after the third game. The senior leads the SEC in scoring and has twice as many assists (26) as turnovers (13) at his new position.

Ole Miss’ new point-guard experiment lasted less than a week before head coach Andy Kennedy decided to go with the sure thing.

Junior college transfer Sam Finley had the edge on freshman J.T. Escobar at the start of the season to replace four-year starter Jarvis Summers at the point. But Kennedy needed more from that spot after the two combined for six turnovers and just five assists through three games.

After the Rebels’ first loss to George Mason in their opening game of the Gildan Charleston Classic, Kennedy called on Stefan Moody to run Ole Miss’ offense.

“He had us all in there after the George Mason loss, and he told us we needed to make some changes and he wanted to try me at the point to see how things work,” Moody said.

Moody spent all of last season leading the Southeastern Conference in scoring in league games off the ball, but the Rebels’ second-year guard played the point at Florida Atlantic and then again at Kilgore College before eventually transferring to Ole Miss. He wanted to help.

“I had a few conversations with (assistant coach Todd Abernethy) about it, that I wanted to play the point,” Moody said. “The new guys, J.T. and Sam, they just got here. They’re not really in it like they should.”

Moody got his first start at Ole Miss on the ball the Rebels’ next time out against Towson, scoring a career-high 30 points while dishing out six assists against just two turnovers. He had a six-turnover, four-assist night in a loss to Seton Hall but has given the Rebels what they’ve needed there since.

The senior is leading the conference in scoring at 23 points per game, has tallied at least four assists in every game at his new position and hasn’t turned it over more than twice in the last three games. He matched his season-high in points and assists while coughing it up just once in the Rebels’ latest win at UMass on Saturday, their third in a row.

“I want him to distribute the ball, and he’s done that at about five (assists) a game,” Kennedy said. “I want him to be efficient offensively.”

Moody is used to shouldering the scoring load and is doing it again this year, accounting for nearly 32 percent of Ole Miss’ points. But his teammates have benefited from the attention teams throw Moody’s way as of late as the Rebels have shot a collective 45 percent from the floor during their winning streak.

“They’re looking at me, and I’ve got players on my team that can make plays,” Moody said. “If you’re just going to pay attention to me, I have no problem passing it to them.”

The plan, Kennedy said, is for Moody to keep passing and scoring from there the rest of the season.

“He’s going to have the ball,” Kennedy said.