ANOTHER ONE: Third straight Crosstown shootout goes to Oxford 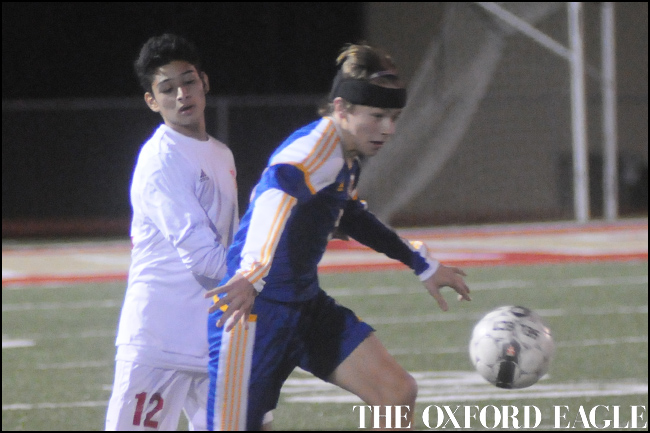 Lafayette’s Carlos Barahona (12) and Oxford’s Davis Carwyle (5) fight for possession during Tuesday’s match at William L. Buford Stadium. The match ended in a 2-2 tie in regulation before Oxford won 4-3 in penalty kicks.

It was business as usual for the Oxford and Lafayette boys soccer teams Tuesday, and that meant settling on a winner with a shootout.

It took all five shots on both sides, but John Handy Jennings tucked his kick in the back of the net to lift Oxford to a 4-3 win in penalty kicks over crosstown rival Lafayette at Lafayette’s William L. Buford Stadium. It’s the third straight year the teams’ annual meeting has been decided by penalty kicks.

The Chargers stayed unbeaten at 7-0, fending off a late surge by Lafayette (3-5) to do so. The Commodores rallied from two different one-goal deficits in the second half to force the shootout, which came down to the final shot.

Lafayette’s Tucker Anderson opened the shootout with a shot that was too wide. Both sides combined to make their next three shots before the Commodores’ Yusha Patton-Bey banged his attempt off the crossbar to put Lafayette in a 3-1 hole.

Jason Reveles made the Commodores’ next shot before Oxford had its first miss when Demirican Usuk hit the crossbar with his attempt. Jonathan Page drew Lafayette even at 3-3, but Jennings ended all the suspense when he followed with a make to give Oxford its second win in the three shootouts.

Oxford’s Cole Calhoon broke a scoreless tie early in the second half with a goal before the Chargers helped Lafayette get it back with an own goal. Calhoon put the Chargers ahead again with 22 minutes left when he received a pass from Jennings in the box and punched the ball into the net.

Lafayette made a tactical change to press forward, and it paid off with less than 4 minutes left when a cross on a free kick found the back of the net for the equalizier.

“Normally we play with four in the back with five midfielders and one forward, so I took one of the defenders out and put another attacker up there,” Anderson said. “I don’t even know if they really even touched the ball. We just had more numbers, more bodies to mark, and I think it kind of threw them off a little bit.”

But Oxford hung on.

“Had a couple chances there to win it (in regulation) and didn’t, but they tucked their PKs away, took care of it, and we got the win. That’s what’s important,” Shivers said. “Bragging rights for the crosstown rivalry.” 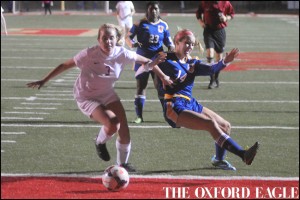 Lafayette’s girls started the night with a 3-2 win over Oxford, but the victory was marred by serious injuries on both sides.

Lafayette’s Nikkie Kesler and Oxford’s Faridah Salau both went down with knee injuries in the second half. Alley Houghton scored all three of the Commodores’ goals while Zoe Scruggs and Morgan O’Connor each had one for Oxford, but the mood was somber afterward as both coaches confirmed Kesler and Salau are likely done for the season with torn ACLs.

“This one’s hard,” Lafayette coach Melinda Scruggs said. “When you walk away with big injuries on both sides, it just makes it tough. Of course you want to win, but you don’t want winning at the cost of people hurting themselves. It’s part of the game unfortunately, and that’s just how it goes. It can happen at any time.”

Houghton scored all of her goals in the first half to give Lafayette (6-0) a 3-0 halftime lead before Oxford (5-3) made things interesting with a penalty kick from Scruggs and a goal off a corner kick from O’Connor with less than 2 minutes remaining. But it was too little, too late for the Chargers.

“We got a little confidence and a little fired up. That’s when we scored two goals there at the end,” Oxford coach Hunter Crane said. “Unfortunately we ran out of time and just didn’t get fired up in time.”