Officer in punching incident will not face federal charges 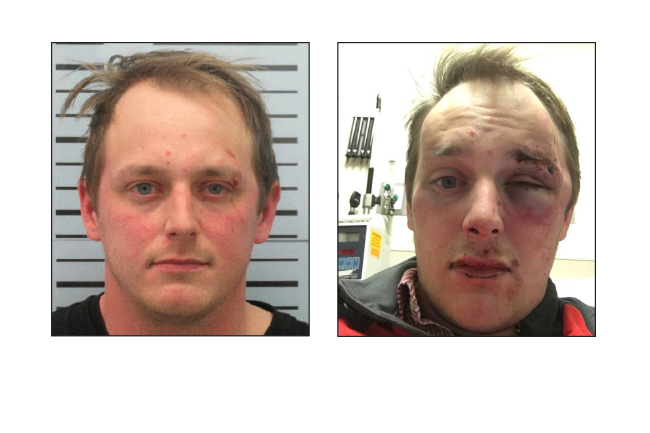 Chris Barnes pictured in his booking photo (left) and after being released from the detention center.

The New Albany police officer who was videotaped punching an Ole Miss fan during the game versus LSU will not see any federal charges, his attorney said Tuesday.

Brock White, the officer, was on security detail with the University of Mississippi for game day. A Facebook video went viral after the game of him reportedly punching fan Chris Barnes in the face.

Barnes, of Oxford, was arrested during the University of Mississippi Rebel home football game against Louisiana State University on Nov. 21 and charged with public drunkenness, disorderly conduct and resisting arrest. During that arrest is when the video was taken and then posted to social media. Barnes was subsequently charged with felony assault on a police officer.

A headshot of Barnes was posted by his wife after the incident, but last week his booking photos from the University of Mississippi and the Lafayette County Sheriff’s Department were released, showing a stark difference in injuries.

White’s attorney, Tony Farese, said the Federal Bureau of Investigation has been reviewing the case and cleared him of charges.

“I was notified this afternoon that the FBI had concluded their investigation of Officer Brock White regarding the Chris Barnes arrest that occurred on Nov. 21, 2015, at the Ole Miss/LSU game in Oxford, MS,” Farese said. “It is my understanding that the video footage of the security cameras at the stadium were reviewed and many eyewitnesses were interviewed. Upon presentation of the results of that investigation to the U.S. Attorney’s office in Oxford, MS, and the Civil Rights Division of the Department of Justice, it was concluded that no further action will be taken. Additionally, my investigation revealed that Mr. Barnes sustained his injuries from an altercation inside the Lafayette County Detention Center and not from Officer White.  My client, Brock White and I are pleased with this news.”

Barnes was in the detention center for about four hours while waiting to be bonded out.

Another man posted in response to the viral Facebook punching video that he worked at the detention center and claimed Barnes was involved in a fight while at the jail.

The Lafayette County Sheriff’s Department did not have any updates in their case against Barnes this morning.