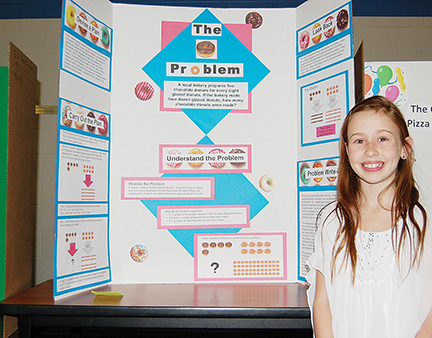 “I used donuts as a way to explain to my class how I solved a math problem,” said Rachel Cohen, a fourth-grader at Della Davidson Elementary School.

How do donuts and math add up? In this case, Cohen said the donuts were not used as a ploy to get her peers to pay attention in class, but rather to help them understand the approach she took in solving her math problem.

“Math is fun,” said Cohen, who participated in the recent school math fair with nearly 100 of her third- and fourth-grade peers. “The way my teacher teaches math to me is interesting, which makes learning how to solve a math problem fun to me.”

The DDES Math Fair, a model that is a first of its kind in Mississippi schools and even on a national level, was the brainchild of DDES fourth-grade math teacher Kimberly Price. Price said she wanted to create a learning fair centered around math to both motivate and inspire the Oxford school’s third- and fourth-graders to become better problem solvers while thinking outside of the box.

“Problem-solving is the cornerstone of school math,” Price said. “In today’s world, math skills are extremely important, and their value is growing exponentially.”

In today’s classrooms, educators, like Price, are reshaping the way mathematics is approached in schools from the elementary level and beyond.

“Math is not just as simple as two plus two equals four with the reason for the answer as ‘just because it is,’” said Price. “The way we teach today gives students the opportunity to approach math problems in different ways. We teach them to be creative while finding the solution to their math problems, and in turn they use their critical-thinking skills, explain their thoughts and processes, and put in writing how they solved their math problem using math vocabulary.

“Doing it this way gives our students a deeper understanding of what they did to solve their math problem.”

Case in point is how fourth-grader Rachel Cohen presented her math problem and solution to her peers by using donuts as visuals and bringing them to class to tell her math narrative — her math answer explained in her own words.

Price said a few years ago when she was thinking about a math night as a school event for parents to attend, she started looking into other ways she could inspire students in the classroom and engage parents in their children’s learning process.

“I wanted to create a math fair for our students so that they would have a way to use math in the way that the new standards — the Mississippi College and Career Ready Standards — require our students to think about math,” Price said.

The DDES Math Fair, which is student-centered, but optional for students to participate in, is a noncompetitive fair that allows students to display what they are learning about math in school.

Students choose a math problem that they want to solve and use a process to solve the problem, which includes writing an explanation of how they solved the problem. It’s an opportunity to write about mathematics, according to Price.

“The problem write-up is where our students gain so much understanding of problem-solving by having the opportunity to express themselves using math vocabulary: they  explain their thought process and strategies that they used, while finding their solutions to the math problems,” she said.

Cohen said she learned that in her math problem, which dealt with ordering both chocolate donuts and glazed donuts, that there was a variable for which she had to find the answer.

“I approached the math problem and thought that my answer was going to be different because in my problem I was dealing with both glazed and chocolate donuts, which was going to determine how I was going to find my answer,” Cohen said.

Cohen said she had to understand the problem, devise a plan, carry out the plan and look back to check her work.

When asked if Cohen wanted to possibly pursue a career as a bakery owner one day, she said, “Probably not.”

However, she added, “I know math will be important in whatever college or life career choice I make one day.”

“Rachel’s answer is the perfect example of what purpose our math fair serves for our students,” said Price. “Ultimately, it benefits our students’ overall education by providing a foundation in problem solving. Problem-solving is not just a math skill, it is a life skill. Through the math fair, our students gain a foundation of processing information and finding reasonable solutions.”