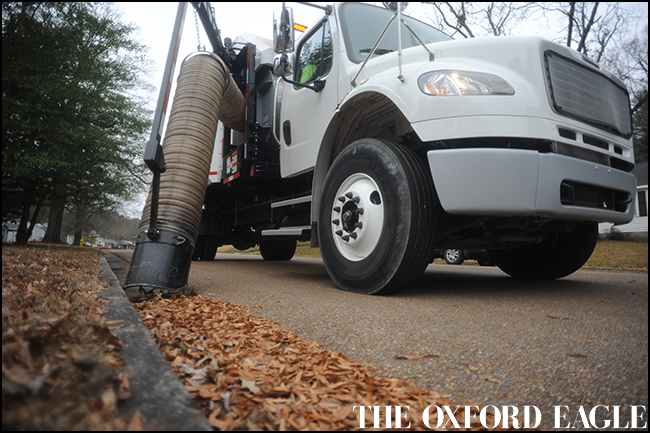 With fall coming toward an end in Oxford, trees are shedding their leaves quickly with homeowners scrambling to keep their yard leaf-free by raking leaves into piles along city streets.

In past years, picking up the piles could easily take several days in a large, woody area, according to Amberlyn Liles, superintendent of the Environmental Service Department for the city of Oxford.

However, that is all changing with the city’s recent purchase of a new leaf truck that will clear the streets quicker than before.

The $165,000 leaf truck was budgeted last year and then ordered to the city’s specifications by Virginia Truck Center.

“It took about a year to come in and we just got it about three weeks ago,” Liles said recently.

The new machine is designed to be a one-man operation; however, Liles said two people will man it until the department gets used to operating the new machine.

How much faster is it?

“An area like Country Club Road would take us a day, a day and a half to pick up,” she said. “Now, it takes two hours.”

Leaves can be raked and put into piles along city streets where trash barrels are normally put out. The piles should not be bagged and sticks and sharp items should be removed from the piles.

“They can get in there and jam up the hose,” Liles said.

The truck is large, like a front-end loader used to pick up Dumpsters.