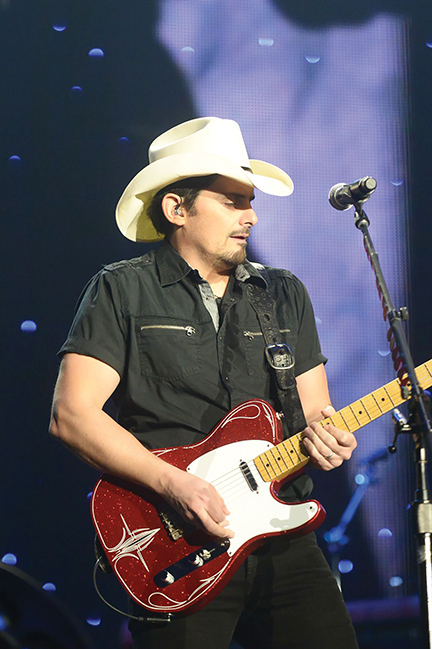 Brad Paisley will take his highly successful Country Nation College Tour presented by Zaxby’s to the University of Mississippi on Sunday, Jan. 24 as part of  grand-opening festivities for the Pavilion at Ole Miss.

Admission will be free with seating on a first-come, first-serve basis. Floor seating will be reserved for Ole Miss students. More details will be announced soon.

“We are thrilled to have Brad Paisley as the first ever concert performance at the Pavilion at Ole Miss,” said Ole Miss Athletics Director Ross Bjork. “From the onset of arena planning, we knew the Pavilion had to capitalize on our community’s love of music and be a true multipurpose facility that would attract world-renowned artists like Brad. Thanks to our partner IMG College for making this a reality.”

“Music and sports are passions of so many people — Zaxby’s included — and we couldn’t think of a better way to unite the two,” said Zaxby’s CEO and co-founder Zach McLeroy. “We’ve been involved with college sports for a long time—Zaxby’s was, after all, started in a college town,” he said. “But we amped it up this football and basketball season by partnering with 30 Division I colleges throughout our footprint. We’ve been excited to play a role in something that means so much to so many.”

Paisley’s current single “Country Nation,” is in the top 20 on the country airplay charts and is the newest single from his chart-topping album, Moonshine in the Trunk album. “Country Nation” was written by Paisley and his longtime collaborators Chris DuBois and Kelley Lovelace. A celebration of the blue-collar spirit and America’s passion for sports, the song weaves-in a shout-out to 18 college sports mascots.

Paisley is a critically acclaimed singer, songwriter, guitarist and entertainer whose talents have earned him numerous awards, including three GRAMMYs, two American Music Awards, 14 Academy of Country Music Awards and 14 Country Music Association Awards (including Entertainer of the Year), among many others.

He has been a proud member of the Grand Ole Opry since 2001.

Paisley has written 20 of his 23 No. 1 singles with the first being his 1999 hit “He Didn’t Have To Be” and his most recent, “Perfect Storm,” from his chart-topping 2014 album Moonshine in the Trunk.

In support of his current hit, “Country Nation,” Paisley recently completed his Country Nation College Tour presented by Zaxby’s, which included various stops at college campuses around the U.S.

On Jan. 21, he’ll launch the 2016 winter leg of his highly successful Crushin’ It World Tour, continuing across the U.S. and Canada during the winter months with special guests Eric Paslay and Cam.

About the Pavilion at Ole Miss

Home to the University of Mississippi basketball programs, the facility boasts a capacity of 9,500 and features a number of first-class amenities, including courtside and baseline seating for students, three premium club areas and more than 1,700 premium seats all within an intimate seating bowl.

Other highlights include the largest center hung video display in college sports with approximately 2,255 square feet of active LED display space and a social area with retail space, a food court, a ticket office and a cutting-edge, fiber optic-enabled Wi-Fi lounge through partnership with C Spire.

The south end of the Pavilion is a five-story parking garage with 800 spaces that services the entire university community.