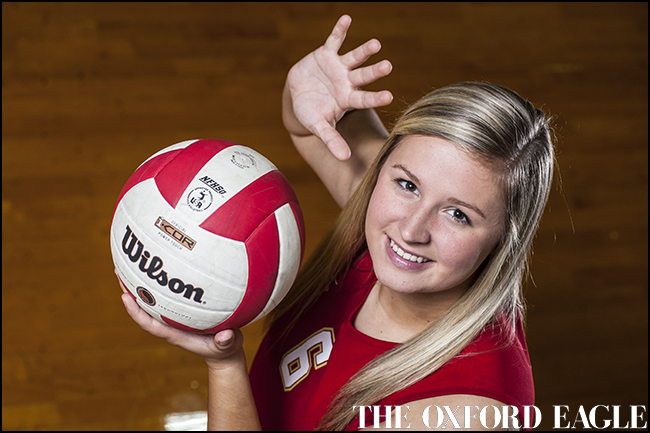 Lafayette’s Emily Robinson was named the 2015 EAGLE Player of the Year after a season where she led her team to the second round of the MHSAA 5A/4A state playoffs and put herself among the best in the country statistically.

It is Robinson’s second consecutive volleyball honor, but she has had the corner market on the last three girls’ EAGLE POY honors as she also took the award in softball last spring.

This is an individual accomplishment but ever the consummate teammate, Robinson refuses to take up the entire spotlight.

“Our team was definitely better,” Robinson said. “I wouldn’t be where I am today without my teammates and vice-versa.”

Once the dust settled on the prep volleyball season across the country, Robinson was second nationally with her 214 aces. The 925 assists were the best in Mississippi. As a setter, Robinson recorded 83 kills and had more than 200 digs.

“There’s definitely challenges that come along,” Robinson said about honing her skills. “You just have to practice and practice and work at it, and it will come to you. I just don’t really pay attention (to stats), and I just wait until after the season to look at it because I don’t want to get too confident in what I’m doing and then mess up.”

Filling up the stat sheet the way Robinson did this season is something that will always please a coach as it usually means there are wins to come along with them. For Lafayette coach Clint Jordan, he has enjoyed his senior’s production on the court, but what he has enjoyed more is Emily Robinson, the person.

“There’s not a lot more to say, to be honest,” Jordan said of Robinson. “She does everything. She leads, she works hard, she’s here every day. Nothing is unimportant to her. She’s very business-like, but at the same time, she can smile and have a good time.”

Robinson’s work ethic is much like Jordan’s, who, when it’s time to serve it up and get the match started, becomes very tuned into what is happening. Those similar traits between coach and player have made it a very easy adjustment period when Jordan arrived at Lafayette before the 2014 season.

Jordan just wishes he could have coached Robinson her entire high school career.

“I knew coming in that I was going to have a good player,” Jordan said. “I was told she was good, but they undersold Emily. I’ve never had anyone as mentally and physically as tough as Emily. … Because of her greatness, she’s allowed me to be able to instill an offense and create an identity that will be here for as long as I’m here.”

Lafayette
Robinson has two other teammates joining her on the All-Area team with Kylie Glass and Orianna Shaw.

As a middle blocker, Glass had a banner season, finishing as one of the top players in the state.

With 301 kills and 107 blocks, Glass finished in the top 10 in the state in those categories. Her 146 aces were good enough for second-best in the state behind Robinson.

“We both have each other’s backs,” Robinson said of her friend on, and off, the court. “We’ll look at each other before a ball hits the ground and we’ll be like, ‘Oh, I got it.’ Even being best friends off the court, we just have that connection.”

Jordan’s two seasons spent with Glass paid dividends for the Commodore senior as he helped make her a versatile threat on the court. Eliminating the one dimension Glass had in her game made Lafayette better as a whole.

“When I got here, (Glass) could only hit to one spot,” Jordan said. “She couldn’t hit the whole court. When we won against Ripley here in the playoffs, she had 11 kills to nine different spots. That’s just an attribute to her growth and she works hard. She is a tenacious player. One of the most improved players that I’ve coached.”

Much like Glass, Shaw had a solid year as one of Lafayette’s key players on defense. Her 279 kills were good enough for 12th-best in the state, but it was her 165 blocks — third-most in the state — that fueled her success.

“Orianna, her improvement over two years has been outstanding as well,” Jordan said. “She blocks naturally better than anyone I’ve coached. (Blocking) is not natural to her. She’s a natural, vertical athlete.”

With Anna Kate Joyce the lone senior for Oxford, Hobson and the rest of the six juniors helped the Chargers make it to the second round of the 5A/4A state playoffs.

Hobson led with her offensive skills, recording a team-high 338 kills that helped her have a kill percentage of 43.3, also a team-best. She also led the team with 121 aces and was third on the team with 211 digs.

There was no sophomore slump for the younger Freeze — her older sister, Ragan, plays for Oxford as well — as she finished just behind Hobson with 120 aces. No other Oxford player finished with more than 45 aces.

Freeze also had a team-best 16 blocks with 12 of them being solo. She finished third on the team with 108 kills. She finished behind her sister with 292 digs.
Grace Anne Joyce came in behind Hobson with 215 kills. The sophomore finished with 23 aces, nine blocks and 85 digs.