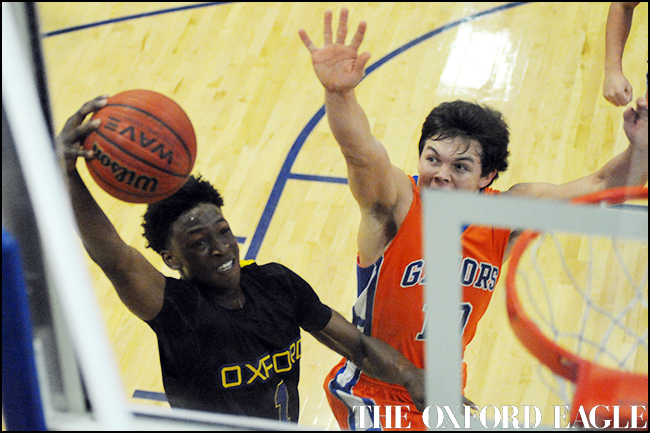 It took 40 minutes and a monster game from Jarkel Joiner but Oxford held off the visiting Two Rivers High School Gators (Danville, Ark.) for a 69-67 double over time win inside the OHS Gym Saturday afternoon.

“We had the lead and lost the lead,” Oxford coach Drew Tyler said after Saturday’s game. “I feel like we played two games in that 40 minutes. Some of the bodies I had in there I was maxing out, with their conditioning.”

Oxford (6-1) jumped out to a 10-0 lead in the first quarter only to see Two Rivers mount a comeback to make it a 15-12 game after the first eight minutes. The Gators were pesky all night, giving the Chargers fits and crawling back from deficits to force not one, but two extra periods.

The Chargers had the lead all game until six minutes to go when Two Rivers jumped in front 47-46. Morgan Yates was the dominant factor for the Gators, scoring 28 points while Colby Whitlow added 20 points to be the only scorers in double figures.

“He was definitely their quarterback on the floor,” Tyler said of Yates. “He gave us some problems. When he wasn’t scoring he was helping his teammates score. My guards watched him in person (Friday) so he was definitely on our radar. We made some plays down the stretch and brought a second body at him and I think that affected him a little bit.”

Joiner was the answer for Oxford all night, scoring 43 points. The rest of Oxford accounted for 26 points with Cole Cromwell the only other Charger in double figures with 12 points.

The lack of productivity from what Tyler calls his most ‘inexperienced’ team that he has coached at Oxford was from not getting second chances at the rim. Oxford would get the rim and either make the shot or have Two Rivers come up with a steal or defensive rebound.

“We’re having too many empty trips on the offensive end,” Tyler said. “We’ve got movement but we’re not executing picks within our set plays, motion offense. Then just one shot and out. We’ve got to get more attempts.”

Eeking out wins
The boys were not exclusive to having a dramatic finish as the Lady Chargers escaped their gym with a 54-53 win over the Lady Gators of Two Rivers on Saturday. The girls’ team also swept their slate of games with a 47-46 win over Jackson Prep Friday.

“We have a loss but you want your team to be battle tested before you get into the division games and your playoffs,” Oxford coach Cliff Ormon said. “That’s what you’re getting them ready for. Two good teams we played and it could’ve went either way both games. We came out on top and very excited for our team but I’d be proud with whatever happened because our kids are battling every possession right now.”

Jordan Freeze was the catalyst for Oxford (8-1), scoring 23 points with 21 of them coming from long range. Freeze hit seven-of-15 three-point shots and at one point made six-of-seven during the middle stretch of the game.

“Freeze is starting to shoot the ball well for us these last three games,” Ormon said. “That’s the good thing about this group. We have kids that have shot it and if you look back at our stats it’s a different kid every night. We’re hoping that continues.”

The clutch point came from Oxford’s Emma Schultz who hit a free throw to go up 54-50 with seconds remaining. Two Rivers’ Grace Coates hit a half-court shot as time expired but came up one point shy on the scoreboard.

Both Oxford squads are off until Friday night when they travel to cross-town rival Lafayette.