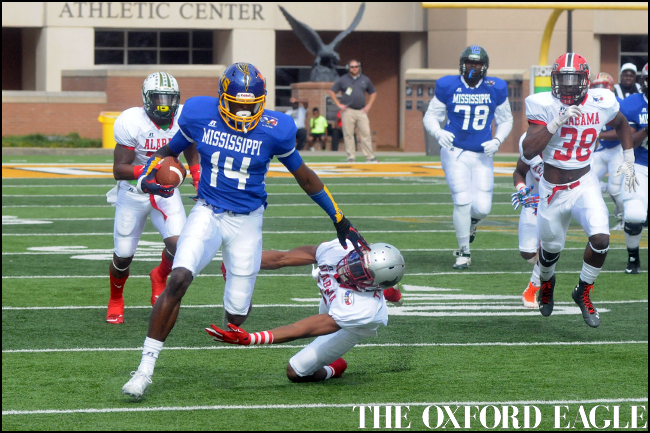 HATTIESBURG — D.K. Metcalf will play his college ball at Ole Miss. A.J. Brown isn’t sure where he’s going yet, though he’s got no shortage of suitors.

But they were on a common mission Saturday.

“We were the best two receivers in Mississippi,” Metcalf said. “It was time for us to show it.”

With some help from Metcalf, Oxford’s standout receiver, and Brown, Starkville’s star pass-catcher, and a stout defense, Mississippi put an end to its misery in the Mississippi-Alabama All-Star Game. In the series’ first game ever played in the Magnolia State, Mississippi snapped Alabama’s seven-game winning streak with a 28-21 win at Southern Miss’ M.M. Roberts Stadium.

Metcalf had a game-high 151 yards and two touchdowns while Brown snagged a game-high nine passes for 137 yards and a pair of scores as a tandem that’s been virtually unstoppable all season had its way with the best defensive backs Alabama had to offer.

The 6-foot-3 Metcalf set Oxford single-season records for receiving yards (1,455) and receiving TDs (22) this year while Brown, who’s being courted by the likes of Ole Miss, Mississippi State, Alabama, Florida and Cal, set the Yellowjackets’ record for catches in a season.

“We knew couldn’t nobody hold us on Alabama’s team,” Metcalf said.

The first highlight for Mississippi came from Metcalf, who caught a hitch, broke three tackles and sped down the sideline 69 yards for the score to get Mississippi even after Alabama linebacker Ben Davis returned Howard’s interception 76 yards for a touchdown on Mississippi’s opening possession.

Brown got in on the action after Alabama retook the lead on Tyler Johnston’s 10-yard pass to T.J. Simmons, jumping over Alabama cornerback John Broussard for a 35-yard touchdown catch with 1:48 left in the first quarter. Six combined turnovers cost both teams chances for more points until Brown snagged a 17-yard touchdown pass from Howard on the final play of the third quarter to give Mississippi the lead for good.

Mississippi put it away when Howard, who threw for 304 yards and four touchdowns, found Metcalf down the sideline for a 32-yard score on Mississippi’s next possession with 6:54 left.

“Me and D.K. on both sides, we knew coming in it’s going to be hard to stop both of us,” Brown said. “We already knew.”

The big plays were the difference in a game where sustaining drives was hard to do on both sides. Neither team had more than 395 yards of offense, and Alabama had a difficult time fending off Mississippi’s beefy defensive front highlighted by Alabama commit Raekwon Davis (Meridian) and Ole Miss commit Benito Jones (Wayne County) along with top recruits Jeffery Simmons (Noxubee County) and Kobe Jones (Starkville).

Mississippi notched nine tackles for loss and limited Alabama to 4.8 yards a play. Johnston and Tyrrell Pigrome, who also had a scoring toss, combined to complete just 14 of their 31 passes for 154 yards while Alabama’s La’Mical Perine was the game’s leading rusher with 48 yards.

“All of us had the size,” Simmons said. “Everybody was talking about (the talent of) the defensive line in the class of 2016, we proved it.”