Do research, prepare before taking in four-legged friend 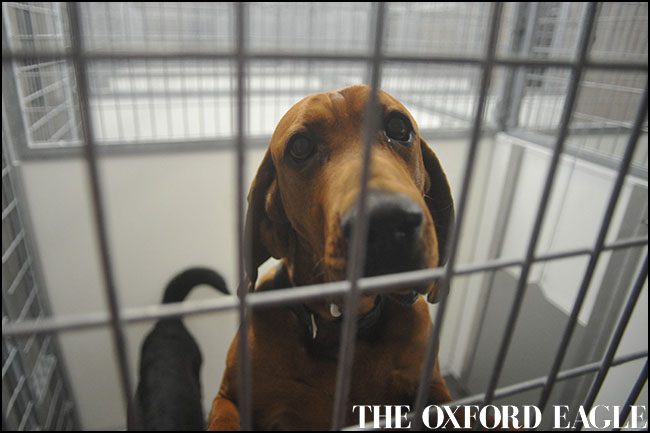 A dog waits at the Oxford-Lafayette Humane Society’s animal shelter on McElroy Drive.

If you’ve done your research and prepared properly, a four-legged friend can be a nice addition to the family for Christmas.

But, if you aren’t ready, it can be disastrous for all involved.

Oxford-Lafayette Humane Society’s executive director, Jenn Petermann, said the staff has fail-safe methods in place for adoption applications and they take each person walking through the doors and each adoption application on an individual basis, especially if an animal is a Christmas gift.

There are currently more than 200 cats and dogs up for adoption at OLHS, and even a pot-bellied pig. Petermann said it’s common to have purebred animals ready for good homes also.

“We try to discourage shopping versus adopting, but I understand someone loving a breed so much that they think the only way they can get that dog is to go through a breeder,” she said. “We just try to let people know that there are a lot of purebred rescues out there and we get a lot of purebreds in here. They might have to wait a little longer, but frequently they come through our doors.”

Petermann said if someone picks out an animal they would like to adopt, one of the best things to do is ensure existing animals in the household are willing to have another furry family member.

“Any room can be turned into a meet and greet room for other animals to meet a prospective adoptee into a new home,” she said. “Usually more than once is a good thing. Maybe come meet the dog or cat here and the next day you can even take the dog walking and let dogs get introduced on neutral ground.”

If they prove to enjoy one another’s company, get the house ready, whether it is puppy-proofing or just getting two of everything.

“Make sure everyone still has their own stuff,” she said. “Make sure they have their own bowls, toys, bed, that this new puppy or kitten isn’t just intruding on the older one right off the bat. Make sure there’s some boundaries. They’re not that much different than people.”

Petermann said adoption numbers are not high in December because people generally are responsible and realize if they have that trip to grandma’s house or that massive party coming up at Christmas, they won’t bring in a new pet.

“Make sure that you know your plans,” she said. “If you are traveling, maybe it isn’t the best time to go ahead and take that leap. Gone a day here and there, as long as you know that your pet sitter or wherever you are boarding can handle an extra animal, that’s fine. But as far as the initial bonding with that animal, you hate for a person to adopt an animal and put it in a boarding facility for two weeks. That’s hard on the animal.”

Think about current pets in the home too, Petermann said, because during the holidays, there are often relatives or friends you don’t see often coming over to the house who may not know your rules for the pets. A gate could be left opened or someone could slip a pet a big hunk of table food and pancreatitis will ensue.

“It helps us tremendously if people have accurate information on their animals as far as verification tags,” Petermann said. “Make sure their microchip information is up to date. Make December be that month you get that all in place.”

Because when Fido and Fluffy get loose and OLHS picks them up, it’s hard if the phone number on their tag was disconnected a year ago.

“You feel like Sherlock Holmes before it’s all over with trying to figure out and place together who this animal is and where it came from,” she said.

Peterman said even if they may not like it, pets can be kept safe in their own room during gatherings.

“Holidays are stressful for animals because they do like their routine,” she said. “If you do have people coming over, try to make it as easy as possible for them. Maybe set up a separate room in the house where they can be away from everyone else if they need to.”

If your holidays are going to be fairly quiet, there is an option if you want to help the shelter and have a little company while watching that Christmas movie by the fire.

“We do have people who come in, even a couple weeks before Christmas, and say, ‘I can’t adopt another one, but I know you guys are full and I’d like to give one a home for the holidays,’” Petermann said. “What’s great about that is a lot of times they’ll send us a photo of the dog at their house. It’s a lot easier to get a dog adopted when it’s sitting under someone else’s Christmas tree than it is to take pictures of a dog in a cage.”

That’ll help come January, when life settles down and people head to McElroy Drive to adopt the pet they’ve been waiting for.

“In January, our numbers usually skyrocket, because whether it’s a child, spouse or grandparent or anyone who has been looking or promised a pet for the holidays, they frequently wait until January when everything settles down,” Petermann said.