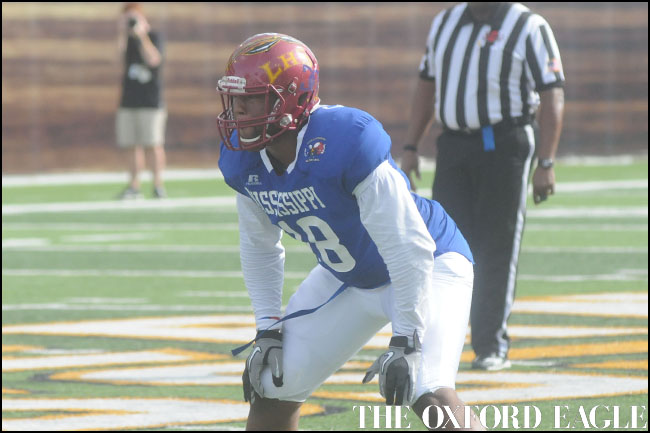 Nothing has changed Octavious Cooley’s feelings about Ole Miss. He still plans to play his college football there next season.

But Laurel’s big-bodied tight end just wants to make sure he’s completely comfortable with his decision.

Cooley helped Mississippi ends its seven-game series losing streak in the Mississippi-Alabama All-Star Game on Saturday in Hattiesburg. After the final second ticked off the clock on his prep career in Mississippi’s 28-21 win, the talk turned to recruiting for Cooley, who’s been verbally committed to Ole Miss since January.

“They’re on top of my list,” Cooley said of Ole Miss, “but I’m definitely going to take some visits in January.”

Though he hasn’t decided on dates yet, Cooley said he will officially visit Alabama, LSU and Mississippi State. He’ll also make a trip to Oxford “pretty soon,” he said.

The 6-foot-3, 220-pound Cooley, who caught 68 passes for 1,448 yards and 13 TDs for Laurel this season, said Ole Miss’ coaches have told him they could also line him up at H-back or in the slot similar to the way the Rebels utilize Evan Engram, which is appealing to him.

“I like how they use their tight ends right now,” Cooley said. “That’s why they’re on the top of my list.”

But Cooley has to sign with Ole Miss first. National Signing Day is Feb. 3.

“Anything can happen,” he said. “Until then, I’ve just got to pray about it.”

Brown being patient
Starkville’s A.J. Brown has Ole Miss on the list of schools he’s considering, but everybody other than Mississippi State has one thing working against them — location.

Brown lives about 15 minutes from Mississippi State’s campus, which he admitted is “a plus.” Many expect the 6-1 wideout to stay in town to play his college ball.

“It’s a little pressure, but you’ve just got to block all that out,” Brown said. “Wherever I decide to go, it’s going to be best for me.”

In addition to the in-state schools, Brown said he’s still considering Alabama, Auburn, Florida and Cal and will begin scheduling official visits this week. Brown said he likes the way Ole Miss spreads the ball around to where “everybody gets touches,” but it will likely be a signing day decision for the Under Armour All-American.

“Just whichever school I feel comfortable with,” Brown said. “I’ve got to be happy wherever I go, so I’m just trying to take my time.”

Like Brown, Simmons hasn’t set up any official visits yet, but he said they’ll likely all come in January. Ole Miss, Mississippi State, Alabama, Auburn and Tennessee are among the teams vying for his signature.

The 6-4, 275-pound Simmons, who had a team-high seven tackles in Mississippi’s win, said he’s looking for a place where he can “really just fit in with the atmosphere.” If that isn’t within the state borders, so be it.