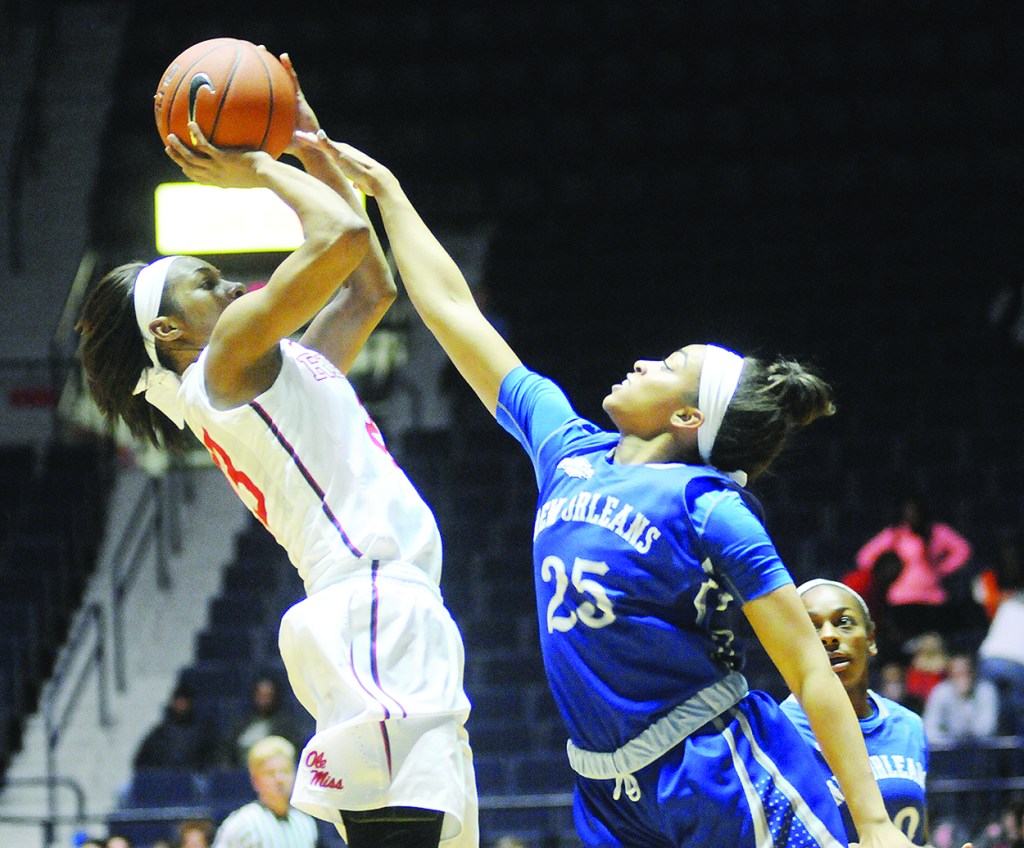 After being held to 38 points by Southern Mississippi on Saturday, the Ole Miss women’s basketball team made sure that did not happen again. It was mission accomplished and then some — before halftime.

The Rebels used a blistering start, fueled by a hot-handed Torri Lewis, to cruise to a 97-59 win over New Orleans inside C.M. “Tad” Smith Coliseum Monday night.

“A great way to bounce back,” Ole Miss coach Matt Insell said. “We did not play well on Saturday at Southern Miss. If we had retipped that game, we probably would have won by 30. … We’re a better basketball team than what we played on Saturday. A lot of respect for our team after that one. We came back and practiced and it went really well. We didn’t do anything on New Orleans. We had to worry about ourself. We had to get ourself better.”

The Rebels came close to doubling their point total from their last game in the first 20 minutes with Lewis accounting for nearly half of those points. The freshman guard had a career night, scoring 23 of her 36 points in the first half with all seven of her made field goals coming from 3-point range. Lewis finished 10 of 22 from behind the arc, tying former men’s player Marshall Henderson for the most made 3-pointers in one game at the Tad Pad. Her 36 points were three shy of tying Peggie Gillom’s record of 39 points scored in a game at the Tad Pad, and she also finished two 3-pointers away from tying the NCAA record of 12 made in a single game.

“I guess mentally I’m just trying to be ready all the time,” Lewis said. “I missed that first shot, and I tried to make sure I go back to what I had been working on. This game I was like, ‘I have to be ready, don’t be nervous.’ … I was being patient, and I guess the rim got a little bit bigger for me.”

Shandricka Sessom finished with 11 points while Erika Sisk and Shequila Joseph chipped in 10 points each.

It was another night of stingy defense by the Rebels, forcing 28 turnovers and scoring 37 points off of them. Ole Miss also created its own opportunities with 19 steals while the Privateers (3-4) managed to only take the ball away three times.

“We’re getting there defensively,” Insell said. “We still have some letdowns from time to time. Tonight we go up 59, and that’s hard. When you get up 50-60 points, you have some tendency to start playing the clock, tendency to start playing the scoreboard. That’s natural, and so the last six minutes was probably the most important for (younger players) on the court.”

‘Home sweet home’
After starting the year 1-2 on their home court, the Rebels have regained control, winning three straight games at home. With five more games left on this six-game homestand that lasts nearly a month due to the holiday break, Insell and company are happy to not have to load a bus any time soon.

“It’s huge, it’s huge,” Insell said of this stretch of games coming up. “The first six games of the SEC (play) is crucial for our basketball team. We’ve got to prepare ourselves for Jan. 3 against Vanderbilt. It’s all hands on deck and these games, every minute of these games, is important to get us there.”

Ole Miss will continue its Big Easy battle when the Rebels host Tulane for a potential big RPI win Wednesday night at 6.