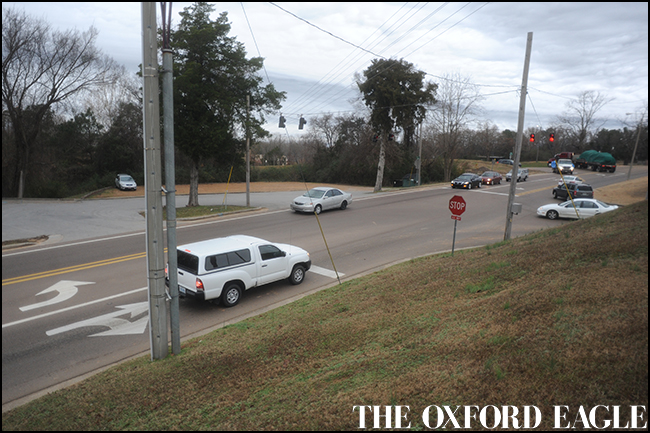 Traffic passes through the intersection at South Lamar at Belk Bouldevard in Oxford, Miss. on Wednesday, December 16, 2015. In a temporary move to speed up traffic, the intersection will be re-striped to create a dedicated right-turn onto Belk coming from south.

To help alleviate traffic jams on South Lamar Boulevard, the Oxford Public Works Department will do some restriping at the Belk Boulevard and South Lamar intersection.

The left turn on the northbound lane for Phillip’s Grocery will be eliminated when northbound traffic is moved into that lane. A new right turn lane will be created where those driving north will have a right-turn only lane to turn into Belk Boulevard.

“The traffic there backs up at certain times during the day and it can be quite extensive,” said Public Works Director Bart Robinson during the Oxford Board of Aldermen meeting Tuesday night.

Traffic was tracked one day in September from 7 to 8:30 a.m. There were 620 cars travelling north during that time. Of those, 100 turned right onto Belk.

“Creating the right turn is only going to help a small piece of the problem,” Robinson said. “But for now, it’s the best option.”

The other idea his staff looked at, Robinson said, was putting a fully functioning traffic light in where now there is only a flashing red at the three-way stop.

“We felt that could create more problems than fix,” Robinson said. “The quickest and easier change is the striping.”

Baptist Memorial Hospital has plans to move Belk Boulevard eventually to tie it into Belk Boulevard Extended with roundabouts where the new $300 million regional hospital is being built, but that could take more than a year at best to be completed.

“They had planned on not creating the roundabouts and moving the road until after the hospital was complete,” Robinson said. “But now they’re reconsidering that after requests from their own people and citizens. However, they told me they could give me a better idea of a timeline sometime in late January.”

Robinson said the traffic on South Lamar increased this summer during construction on Highway 7 when people started using the boulevard to avoid the construction traffic. Several developments are also under construction along the already-busy roadway.

The restriping could make it harder for drivers coming from Harlan Drive who want to turn left on to South Lamar.

“Right now, many come out into that left turning lane and use it like a refuge until someone allows them into the right lane to go north on South Lamar,” Robinson said.

Those drivers may find it easier now to turn south and use Horne Road or Office Park Drive.

“It’s a way to redirect the traffic on that road right now,” she said at the meeting.