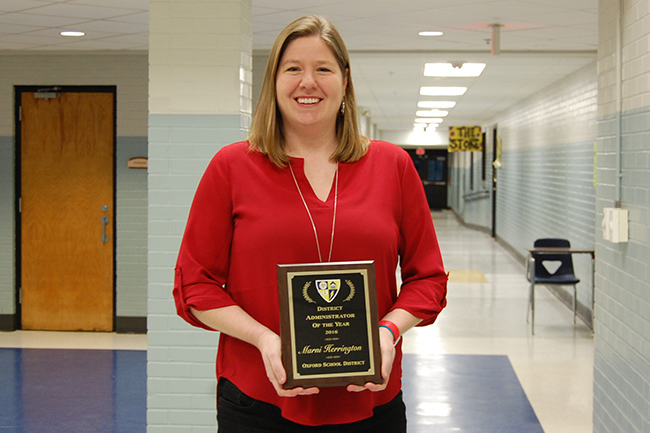 Oxford High School Assistant Principal Marni Herrington, an Oxford High School alum, is the 2015-2016 Oxford School District Administrator of the Year. She was presented with the professional recognition award by OSD Board President Whitney Byars at the district’s Board of Trustees’ December meeting.

She is entering her third year as an assistant principal at OHS, but has been present in the classroom for 11 years teaching AP biology and biology to Oxford students.

Herrington graduated in 1998 from Oxford High School, where she was inducted into the school’s Hall of Fame for her academic honors as an outstanding student-athlete. She then pursued an undergraduate degree in secondary education from Mississippi State University. After graduating in 2002, she began teaching at Oxford High School the following fall. Herrington also earned her master’s degree in curriculum and instruction from the University of Mississippi.

She resides in Oxford with her husband, Thomas Herrington, who also teaches at Oxford High School. Together, they have two children, Carter and Bryson.