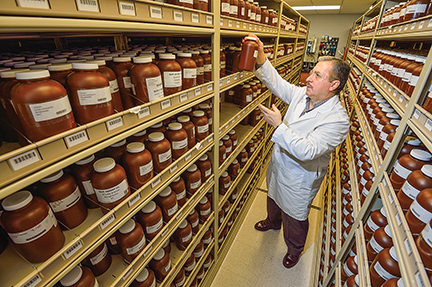 Since 1995, the University of Mississippi School of Pharmacy’s inaugural research center has been setting the bar in the areas of natural products chemistry, botanical supplements development and marijuana research — and more.

“We’re delighted to celebrate the 20th anniversary of the National Center for Natural Products Research this year,” said Larry A. Walker, NCNPR director. “This is a wonderful opportunity to reflect on our growth and successes over the past two decades.”

The center has grown significantly since its modest beginning. Organized under the umbrella of the pharmacy school’s Research Institute of Pharmaceutical Sciences, the NCNPR was authorized by federal legislation sponsored by Sen. Thad Cochran in 1988 and began operations in 1995.

“When we first occupied the north half of our building in 1995, I think we had 24 total people at that time,” Walker said. “I remember being uncertain about exactly how we would put together the funding pieces and grow the program. We had a few small grants and a number of great ideas, but we were definitely breaking new ground.”

Alice M. Clark, now the university’s vice chancellor for research and sponsored programs, became the center’s first director in 1996. Working with Walker, who was then associate director, Clark visualized the center’s infrastructure and began building the program from scratch.

The center’s early achievements fell into two categories, the first being research discoveries that advanced the science of medicinal plants and drug discovery and development, Clark said. The second were strategic advancements that led to new partnerships and growth.

“On a very basic level, our earliest goals were to put the people and resources in place to make scientific advancements that would lead to key strategic and sustainable partnerships,” Clark said. “On a larger level, the goal was to bring to life the center’s mission. A key factor in achieving this was the ability to leverage the faculty in the academic departments in the School of Pharmacy, and the support of these faculty members was essential.”

The USDA’s Agricultural Research Services moved its Natural Products Utilization Research Unit to the center in 1996. Stephen O. Duke was named research leader of the unit.

“Over the years, university and USDA scientists of the NCNPR have synergized each other’s research in many ways,” Duke said. “This close partnership has enabled new avenues of highly successful research for both groups.”

The formalization of the previously established partnership was a major step for the center that paved the way for other federal collaborations.

“The center’s partnerships have resulted in many joint projects, publications, patents, technologies and knowledge that have advanced science and informed policy and consumer decisions,” Clark said. “And strategically, they have helped establish an environment that has led to the development of additional strong, productive collaborations.”

In 2001, Walker was named director. That year, the center launched its partnership with the U.S. Food and Drug Administration. It formally recognized the Center of Excellence on Botanical Dietary Supplement Research in 2006.