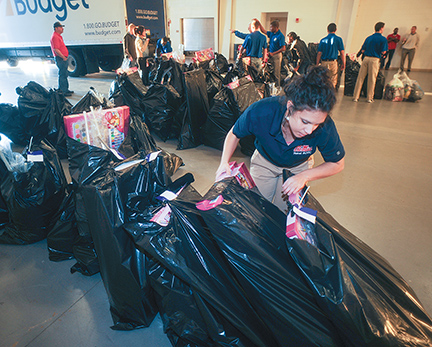 Bruce Newman Courtney Marie Laureys helps organize toys for “Toys for Tots” before they are distributed at the National Guard Armory in December 2015. The application to apply for this year's Toys for Tots is Nov. 30.

Several of Santa’s helpers were on hand Thursday at the National Guard Armory unloading bags of goodies for more than 100 local families for Mid South Toys for Tots.

It wasn’t a red sleigh bringing the toys into Oxford but a large truck and his helpers were void of pointy ears and green hats. But they did have big hearts and worked hard to make sure all children have gifts under their tree this year.

Harrison Davis, a senior at Oxford High School, was one of the many helpers Thursday. A cadet in the Marine Corps JROTC, he was joined by several other cadets who first helped to unload the truck at about 4 p.m.

The toys were already bagged up in big black bags and labeled for each family.

“We lined the bags up alphabetically,” Davis said.

As parents arrived to pick up their bags, the volunteers got the family’s name and easily located their bags. Each bag contained eight toys and some stocking stuffers for each child in the family.

This was the first time for Davis and the fellow cadets to help during distribution day for the toy program.

“It’s good to help people during Christmas,” he said. “It’s the time of year when people should help others and give what they can.”

In years past, families receiving toys and gifts through the Mid South Toys for Tots program living in Oxford had to drive to Batesville each year to pick up donated gifts.

This year, volunteer and Marine veteran Gene Hayes was able to secure the armory to be a distribution site.

Assistant Coordinator Lindsey Chrestman said since putting the application process online, the numbers of families requesting assistance has risen, but local residents have met the challenge.

“The generosity of the people in this area has allowed us to provide these families with a good number of toys,” she said.

Cash donations help fill in the gaps so the organization can purchase gifts for babies and older children since most toys donated are generally appropriate for children 3 to 8 years old.

“We only leave 3 percent of donations for costs associated with the toy drive,” she said. “So we have to have a lot of things donated, like warehouse space and pick-up locations. A lot of our volunteers often spend their own money as well to help make this a success.”

The program is sponsored through the United States Marine Corps Reserve.