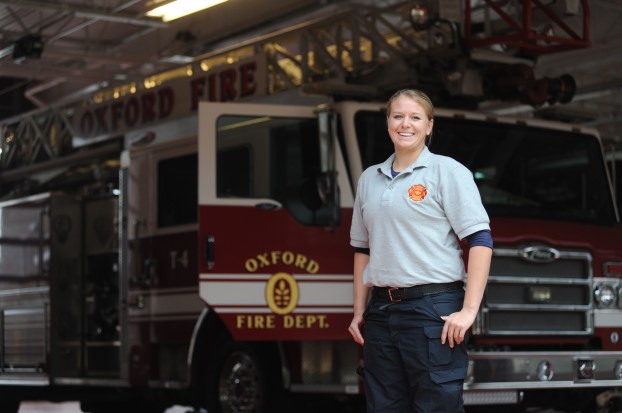 A softball coach from North Carolina is the first female hired by the Oxford Fire Department with hopes of becoming a full-time firefighter.

Brittany McKinney, 27, moved to Oxford about four months ago and in October applied to OFD to become a firefighter.

She has no previous firefighting experience and will spend the next six months working at OFD Monday through Friday, 8 a.m. to 5 p.m. helping the firefighters, attending training classes and learning the ins and outs of being a firefighter. In April, she will attend the firefighter academy and if she passes, she will be the city’s first female firefighter.

OFD Chief Cary Sallis said McKinney was one of four women who applied in October but was the only one who passed the Candidate Physical Ability Test.

“She impressed everyone during her interview,” Sallis said. “Her ability to complete the CPAT and her determination in doing that put her above some of the other candidates. No one had any reservations in selecting her.”

She was officially hired Nov. 30.

McKinney was a Division 1 softball coach at North Carolina State and UNC Greensboro. She played softball for UNC Chapel Hill.

“It’s always been my passion to be a servant to the community,” McKinney said. “I was coaching and playing softball professionally because it was what I always knew. But I also knew this was the career path I wanted to follow.

McKinney is currently working on getting her volunteer firefighter certification, which allows helping on calls.

“She can’t go into a structure,” Sallis said. “But she can help pull hoses, move equipment and once she gets her certification, we can do some live training.”

She will start a regular working firefighter shift schedule in the middle of January.

Sallis said the fire stations all have individual bathrooms and bedrooms so no special accommodations have to be made for females.

“We always knew and anticipated having female firefighters one day,” Sallis said.

Sallis said he’s excited and proud to be the chief of the OFD that welcomed their first female firefighter.

“We haven’t had many females apply until this year,” he said. “We had one about eight years ago but she couldn’t make it through the physical test. This makes us a better, more diverse fire department.”

McKinney said she had no idea OFD had no female firefighters when she applied and hopes that she can be a role model to other young women out there who are considering a career in firefighting.

“I had no intentions of being a trailblazer when I applied,” she said. “But I had role models when I was younger that I looked up to and hopefully I can be that to someone pursuing a career in this field.”

McKinney said her reception has been warm and welcoming.

Lafayette County Volunteer Fire Department only has three paid firefighter positions and they’re all male, however they do have five female volunteer firefighters.

“We have two in certification class right now, two who have been here about 10 years,” said firefighter Wes Anderson, “and one has been with us about three to five years.”