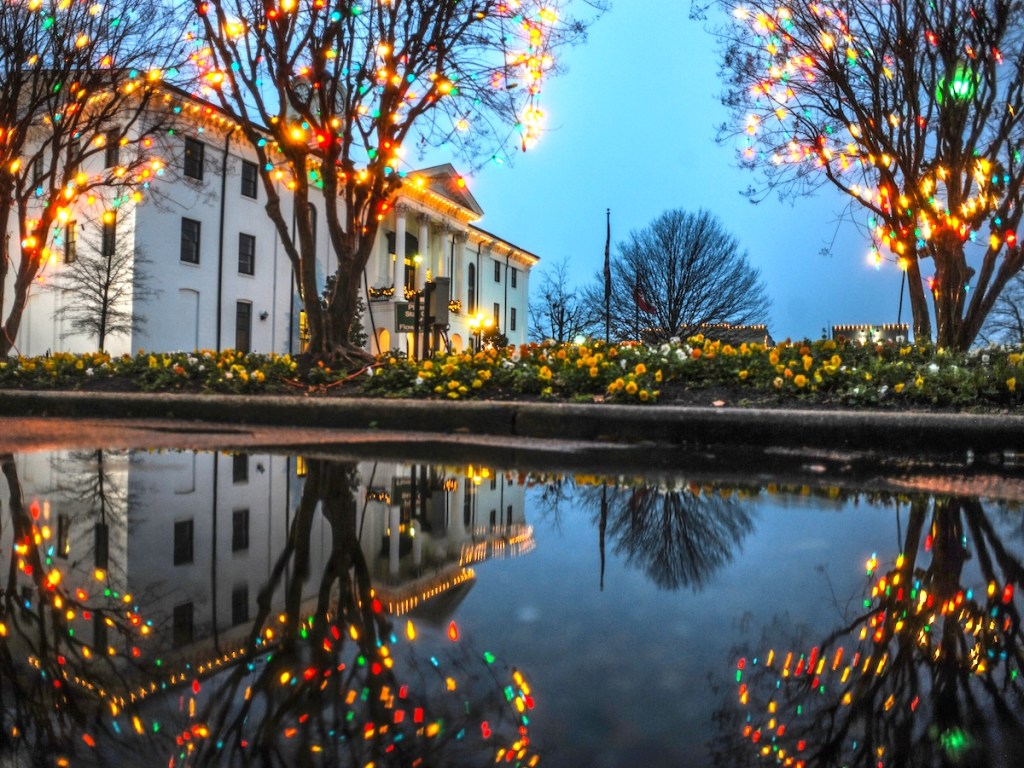 Christmas lights on the Square in Oxford, Miss. on Wednesday, December 16, 2015.

When Country Living named Oxford one of America’s 20 Best Small Towns for Christmas earlier this month, it was no surprise to Billy Lamb.

Lamb, who is the building and grounds superintendent for the city, spends two to three weeks each year with his crew getting the downtown Square ready for the Christmas season.

“It’s just gorgeous, isn’t it?” he said of the Square.

From hanging wreaths on North and South Lamar boulevards, to draping big, colored bulbs around the trees on the Square to decorating the city’s official Christmas tree in front of Town Hall, making the Square Christmas-ready is a big undertaking that involves city employees from Buildings and Grounds, Oxford Electric Department and at times the Public Words Department.

The city started lighting up the Lafayette County Courthouse around 1998, Lamb said. Lights were added to the ridges along the storefronts and apartment buildings about 20 years or so ago, he said. In 2005, they were all taken down and replaced with newer, smaller white lights.

“Those stay up, unless we need to change them out,” Lamb said. “The ones on the courthouse stay up as well all year.”

When Mayor Pat Lamar served from 1997 to 2001, the city started wrapping the bases of the crepe myrtles with lights.

“Mayor Pat (Patterson) is partial to the big, colorful bulbs so we started draping them around the tops of the trees,” Lamb said. “They just look so Christmas-ey.”

When the colored lights went up on the trees, the city had to redo much of its electric around the Square to accommodate the new lights.

“We were throwing breakers all over the place,” Lamb said. “The electric company helps us a lot, with electric wiring and using their bucket to put up and fix lights.”

The city used to light up the bottom of the big water tower; however, with the addition of so much communication equipment that’s been added to the tower, the city decided to bring back a community Christmas tree that was lighted this year on Black Friday.

“There’s a photo that shows Mayor John Leslie, in the ’70s lighting a tree,” Lamb said. “Then at some point they went to lighting the water tower and now we have the tree again.”

Lamb doesn’t know how many lights cover the Square.