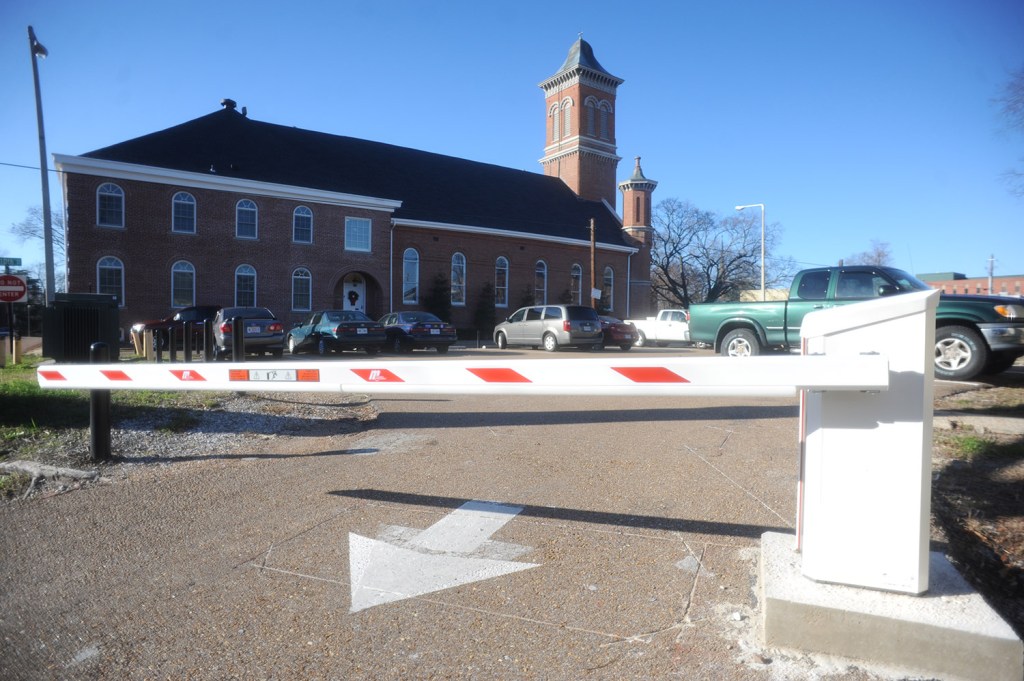 A gate blocks the exit to the First Presbyterian Church parking lot, in Oxford, Miss. on Friday, December 18, 2015.

There is little disagreement that since parking meters have been installed, they have helped control and manage parking around the Square and have raised more than $600,000 in revenue.

However, making people pay for parking has had some unforeseen negative impacts on downtown churches as people flock to their parking lots to avoid plopping some quarters into the meters.

On Friday, representatives from the downtown churches met with the Oxford Downtown Parking Advisory Commission at City Hall to share those impacts, which have caused one church to take expensive measures and another church to consider similar tactics to protect their private parking lots.

Ralph Vance, speaking on behalf of St. Peter’s Episcopal Church, said the church’s parking woes have grown since the meters were put in.

St. Peter’s has a total of 32 parking spaces. They lease eight to the EAGLE and seven to The Ritz condominiums to use. The remaining are constantly full with people trying to avoid the meters.

“We’ve had discussions back and forth on what we should do, whether we should prohibit people coming in and using the lot other than the church,” Vance said. “We’ve considered putting up a cross gate. All these things have their downside. If you put up a gate, then who can use it? And what kind of code will it need. It’s very expensive as well. But people who work at the church can’t even park there most days.”

Melissa Hall with First Presbyterian Church said her church has already put in a gate after their 19-lot parking lot was constantly full after the meters went in.

“It was a fairly significant expense,” she told the commission. “Just last Thursday we had to replace the arm that was broken by a couple of vandals, which was $5,000.”

Despite the expense, the gate has helped keep the lot clear for the church’s employees and members who use a special ID card to get into the gate. She said before the gate, the lot would be full some days by 9 a.m.

“It was fairly clear a lot of the people parking there were employees working at the restaurants around the Square,” she said.

Commissioner Tom Sharpe asked if the lot was left open at night.

“No, we had a lot of overnight parking before we gated it,” she said.

Some of the church representatives complained about trash left in their lots by people parking there who are not associated with the church.

Danny Flowers with First Baptist Church said they have someone who goes out each morning and cleans their two parking lots. They have one across the street from the church, behind the Rebel Bookstore, and one on the church property.

“He knocks on windows and wakes up people sleeping in their cars and cleans the garbage left there,” Flowers said. “But overall, we don’t really have much of a problem with parking since the meters came in.”

Flowers said the lots occasionally fill up when other churches are having funerals or the Federal Court has grand jury, but that overall, the paid parking hasn’t affected the church.

“A lot of people use our lots and it really doesn’t hurt us,” he said.

Eddie Rester with Oxford-University Methodist Church said his church’s parking lots have been feeling the effects of the parking meters as well.

“Out lots get used significantly,” he said. “We want to be good neighbors. We don’t know if we want to put meters in or some other type of system.”

The church leaders also agreed they needed to work together toward some solutions like coordinated shuttles for their congregations on Sundays.

“Since restaurants are open on the Square, parking spaces are much less on Sundays,” Hall said.

Patterson asked the church leaders what the city could do to help.

Rester said he’d like to look into some type of joint management.

“Whether that’s metered and paid parking, I don’t know,” he said. “Maybe more of a partnership instead of us just protecting our parking from kids.”

Patterson said the city has tried to work with local churches to help provide more parking but said it never worked out, sometimes for legal reason. Some of the suggestions included the city put in meters and split the revenue with the churches.

No action was taken during the meeting.