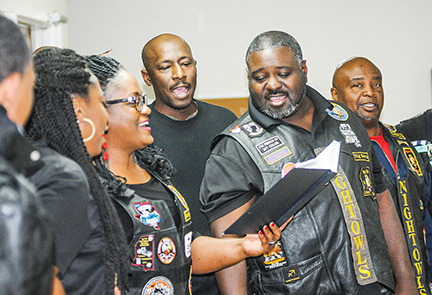 Lyndy Berryhill Members of the Night Owls Motorcycle Club dropped by the Oxford Health and Rehab Center to sing Christmas carols, give out gift bags and visit with residents.

Members of the Night Owls Motorcycle Club stopped by to give gifts, sing carols and wish the residents “Merry Christmas.”

Vice president of the club, Raymey Westbrook, said, “When people see people on a motorcycle, they think they are rough, but we are different.”

The Night Owls had asked beforehand what would be appropriate gifts to bring them and put together treat bags. When they showed up, some of the residents were so excited by the loud bikes they waited at the window until they came inside.

Westbrook said the club tries to fill a need in the community by their actions.

Several club members have elderly family within the center. Westbrook said the club tries to foster a system of service, so the younger help the older and continue to do so.

The club even prepared gift bags with soft candy, fruit and Christmas cards for bed-ridden patients who were unable to come in the dining area to see them.

VanWinkle said, “It really was neat to see the residents get excited.”

She said more than several residents do not get many visitors come see them throughout the year, much less the holidays. Unfortunately, what should be the happiest time of year is a lonely one for some elderly.

“Some of our residents can get a little depressed during the holidays, so it is always nice to have something like this where they can feel the Christmas spirit,” she said.

Club member Eddie Anderson said, “A lot of folks think that if you are in a motorcycle club, you’re a gang, but we’re not.”

The club has a monthly meeting where they plan service works. The group has cookouts and sells plates for people out of work with illness, donates to the Oxford Food Pantry regularly and volunteers at the Boys & Girls Club.

Anderson said the club tries to ask around the community about new places to volunteer.

VanWinkle said if more people knew the amount of charitable work some motorcycle clubs do, they would not be associated negatively.

The club is already scheduled to come back and visit in the spring when the weather is warmer.

“We try our best to give back to the community,” Anderson said.