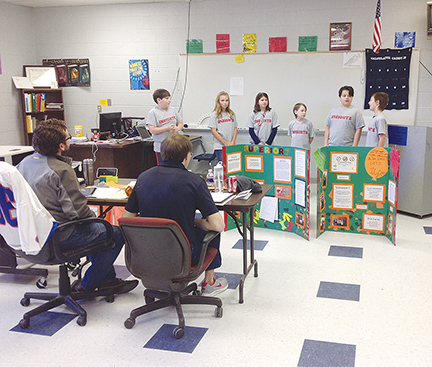 Submitted Students are hosted by Lafayette High School Seniors and other volunteers on their robotics skills.

The Lafayette High School Robotics Team was on the other side of the competition for a change at the North Mississippi First LEGO League Qualifier Tournament Saturday.

Several members of the team took on leadership roles in hosting the tournament. The students were needed as judges and referees to make sure the event with nearly 70 students involved went smoothly.

Taylor Langford, sponsor to the high school robotics team, said being on the judging side helps his students

The event featured eight team from Mississippi for the FLL competition and three categories of scoring levels in the tournament.

The first category was based on robot design, the capabilities of the robot and how the team worked together to complete the design.

The second category was “Trash Trek.” Students had to design a conservation project that featured a theme such as composting or recycling.

The third category was core values. The student judges had to listen to the younger students about their teamwork. The assignment had teamwork exercises and drills to observe how they communicated within the group.

Lafayette Senior Mary Morris Jackson said being a judge was challenging, but rewarding.

Langford said she had a lot of responsibility.

“It was nice to see the other side,” Jackson said.

This is Jackson third year to be on the robotics team. She said she is more artistic than technical, so she surprised herself when she joined an engineering robotics team.

“It’s certainly not something I saw myself doing,” she said.

Along with four other team members as well a few former students, she helped out. She said it was hard being a judge. The students were all enthusiastic.

“They all did a fantastic job with it,” she said.

Jackson is a builder for her high school team. Instead of assembling robots with Legos, she is part of the First Tech Challenge team for eighth grade up to 12th grade. It involves using real metal and other material to design, assemble and program a robot.

She and others will have their last competitions in January and February of 2016. The LHS will host another FTC competition in January. The state tournament will be in February.

Langford said hosting experience would be good for them as they prepare for their own competitions. In the past three years, the team has been in the top five.

“It gives them a good look at what it takes to be well-prepared,” Langford said.