END OF AN ERA: Rebels send Tad Pad out with OT win 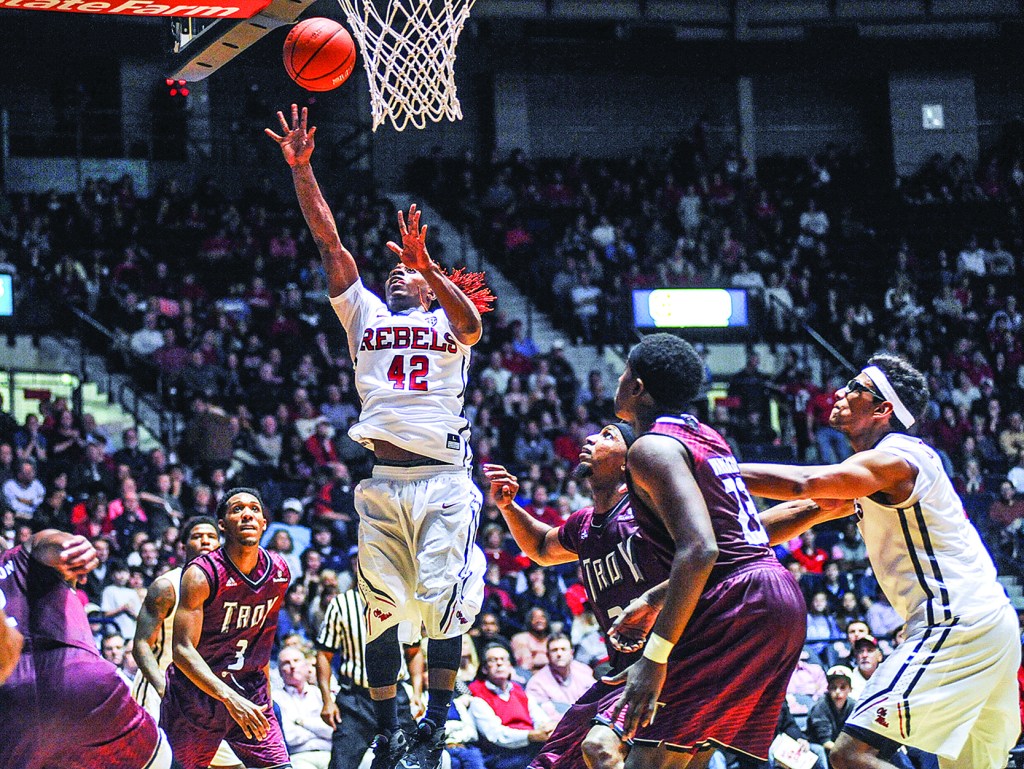 It was a day where Ole Miss closed the book on one chapter as the men’s basketball team played inside C.M. “Tad” Smith Coliseum for the final time before moving over to The Pavilion at Ole Miss on Jan. 7.

The home crowd was sent away from the Tad Pad for the last time with a smile as the Rebels defeated the Troy Trojans 83-80 in overtime Tuesday afternoon. It was Ole Miss’ seventh win in a row.

There was much celebration before, during and after the game, but the visiting Trojans tried to spoil the party with pesky defense and offense.

Ole Miss (10-2) overcame 16 total turnovers and a poor shooting performance in the first half.

“I thought we started the game well,” Ole Miss coach Andy Kennedy said. “We got out of the gate good and then just gave it to them two or three times in a row off pressure.”

The offense found itself to start the second half as Ole Miss opened up a 10-point lead thanks to a 15-4 run in first four minutes.

One of the major catalysts for the offensive production was Tomasz Gielo. The Poland native had a career night, scoring 23 points and tying Stefan Moody for the team-high in points.

Gielo fueled his big night hitting five of 11 shots from 3-point range, starting his night making his first three shots from downtown before missing four of his next five attempts.

“It was just about perseverance,” Gielo said. “It’s basically a mind game every time. If you make the first three, you feel good about yourself. But if you miss another two or three you’re like, ‘Man, am I a good shooter?’ and start doubting myself. But (Kennedy) just told me to keep shooting.”

Gielo and Moody had to keep shooting because Troy’s trio of shooters were hitting everything they threw at the basket in the second half. Jordan Varnado, Jeremy Hollimon and Wesley Person combined for 56 points with Hollimon leading the way with 22. Person and Varnado added 17 points each.

Troy used a matchup zone defense which puzzled Ole Miss, keeping the Rebels on the perimeter most of the game, though at times the Rebels could penetrate and drive to the basket.

“I thought the position in which we were getting shots in the second half was much better,” Kennedy said. “Ultimately we were able to get just enough stops.”

The game got exciting when Troy cut a 13-point deficit and managed to tie the game at 73, forcing the final game at the Tad Pad to go into overtime.

Gielo proved to be a crucial factor once again late in overtime when he hit a 3-pointer to tie the game once again at 78 and pulled down a big defensive rebound on the following Trojan possession.

Sebastian Saiz, who played limited minutes due to an eye injury he sustained at Memphis last week, hit two key free throws to give Ole Miss an 82-80 lead with 33 seconds left. Ole Miss held on from there.

Said finished with 11 points and eight rebounds in 25 minutes.

Saying farewell
It was the 700th and final game for the men’s program inside Tad Smith Coliseum, and there have been plenty of fond memories for Kennedy during his 10-year tenure at Ole Miss.

The team came down through the crowd before the game much like teams did in the past during the late 1990s, and streamers fell from the roof during the starting lineups, another nod to past traditions.

During halftime, a video played showing some of the biggest moments of both the men’s and women’s programs.

“I’ll miss the fact that we’ve won 80 percent of our games in here,” Kennedy said. “I hope that transfers over. It has been a very good home for Rebel basketball over the years.”

Gielo has only played in five games at the Tad Pad, but the experience of the final game was not lost on him.

“For me, it feels special because I’ll leave this place undefeated,” Gielo said smiling. “I can tell my grandchildren I was undefeated in the Tad Pad. It definitely feels good.”