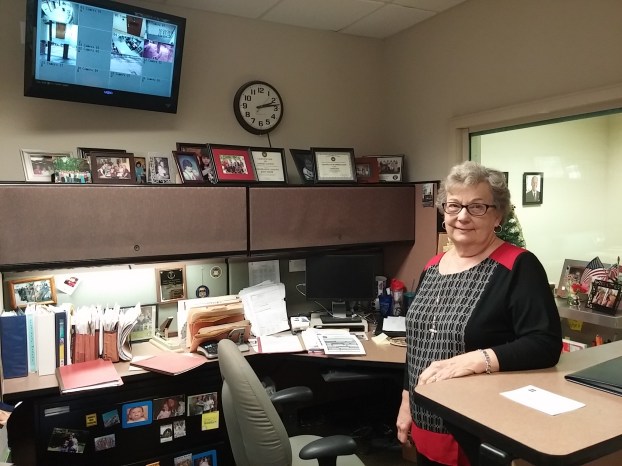 Kitty Smith stands in her office area at the Bureau of Alcohol, Tobacco and Firearms in Oxford on Tuesday. She is retiring after more than 40 years of service on Dec. 31.

Kitty Smith has dealt with violent federal crime by day and taught kindergarten Sunday school on the weekend for more than 40 years.

It’s now time for the 65-year-old to hang up her stenographer pad at the Bureau of Alcohol, Tobacco and Firearms and enjoy the next chapter of her life at her home in Oxford, whether it is remaining active at St. Peter’s Episcopal Church or traveling to Glacier National Park.

Smith’s last day as an investigative analyst is Dec. 31, and she will take away 40 years of knowledge about the bureau, how it operates and memories of some unique experiences.

Smith started with the ATF in September 1975 as a stenography clerk when the office was in the federal building downtown.

“When I started to work, the big thing was moonshine whiskey,” she said. “The agents were still going out to the whiskey stills and prosecuting them in federal court. That was very interesting. I hadn’t been working about two weeks and one of the agents comes walking in the door and he’s got two little guys in handcuffs behind him and he’s got his gallon jug of moonshine that’s he’s about to send to the lab to get tested. It was pretty cool.”

Moonshine, Smith said, is very unhealthy due to lead poisoning and more, and she even sported a bumper-sticker that says “moonshine kills.”

Back then, before the times of cellphones and computers, Smith would work the radios to get out communication for the 37 counties the Oxford office handles — the whole upper half of the state.

“It would be really hard, if we had a big call-out to get somewhere, and we have people out in Tishomingo County or Coahoma County or wherever,” she said. “We have federal radios but they only reach so far, and the towers only reach so far.”

Through networking she would get the job done, all with a headset in her ear listening to tapes of agents make cases against the bad guys, whether it was in a busy restaurant, along a highway or in a home.

Transcribing those tapes and getting five copies typed on a typewriter and filed was one of the more complicated and least favorite parts of the job for Smith, prior to computers making her life a whole lot easier.

“When the guys would work undercover, when they would go in and tape an interview,” she said. “What made it so hard was I would be sitting at my desk, trying to do my job, people were coming in, the agents are coming and going, the phone’s ringing, the radio’s going off, and I’m sitting there trying to push that button and transcribe a tape, and that is miserable. Plus, trying to understand what people are saying when you are listening to two to three people talk at the same time.”

But it was important work  — everything was evidence and to be used in court, whether it was moonshine deals, church fires in the 1970s or illegal weapon chatter.

Smith had 10 bosses over the years, a couple different titles and worked with hundreds of agents throughout the district.

In 2004, the office outgrew that building’s capacity and they moved out to University Avenue. Also with that move came some of her more exciting times with the bureau.

“Over the years it’s more shifted to the gun control act and we work more enforcing federal firearms and explosives and arsons,” she said.

But despite guns and gangs being the bulk of the work, that doesn’t mean moonshine went away. She went on a raid and busted up a still with agents in 2012.

“That’s been my dream before I retired,” she said. “I always wanted to go to a still.”

But the most exciting job she’s had is working with the Asset Recovery Team.

“I got chosen to be on this call-out team that across the country when ATF would have big seizures of explosives or guns or tobacco or whatever,” she said. “I worked on that for 10 years, maybe. You never knew where you were going. You would just get an email and it would say are you available for such and such a date, and you think, I’m available, where might they send me?”

Those jobs took her around the country to help count seized items.

“I’ve been to Ohio in December with gloves sitting by a space heater typing in serial numbers of guns. I got lucky one time … it was in the summer and I got to go to San Juan, Puerto Rico. I counted cigarettes in New York – I was there for a month. That’s been my favorite thing, just getting to meet the IAs from across the country.”

Another highlight was training and working at headquarters in Washington, D.C. She went up there to work twice and loved it.

Her efforts over the years have won her several accolades, including Lafayette County’s Law Enforcement Association Support Personnel of the Year Award, a Gallatin award from the U.S. Treasury department and more. A flag also flew over the Capitol for her and she will be featured in an upcoming issue of “Inside ATF” magazine.

In thanking her for her service, ATF Deputy Director Thomas Brandon said, “Kitty, you have been the hub of the Oxford Field Office. You have made co-workers feel like valued team members, and the office like a second home with your holiday and birthday celebrations. Home-cooked food and tattered, but heartfelt, birthday banner. Your ATF family from coast to coast will miss the warm smile you gave as they greeted you with, ‘Hello, Miss Kitty.’”

“I’ll miss the guys,” she said about leaving. “It doesn’t ever get boring, but I’m just ready to move on.”

Always up for an adventure, she has a trip planned to Montana to see her sister and to snowmobile. But she’s also going to take it easy in retirement by sewing, hiking and relaxing.

“My husband’s retired and we have a cabin out in the woods and we’re going to spend time on the porch just doing nothing, drinking coffee, daydreaming, napping – all the good stuff,” she said.