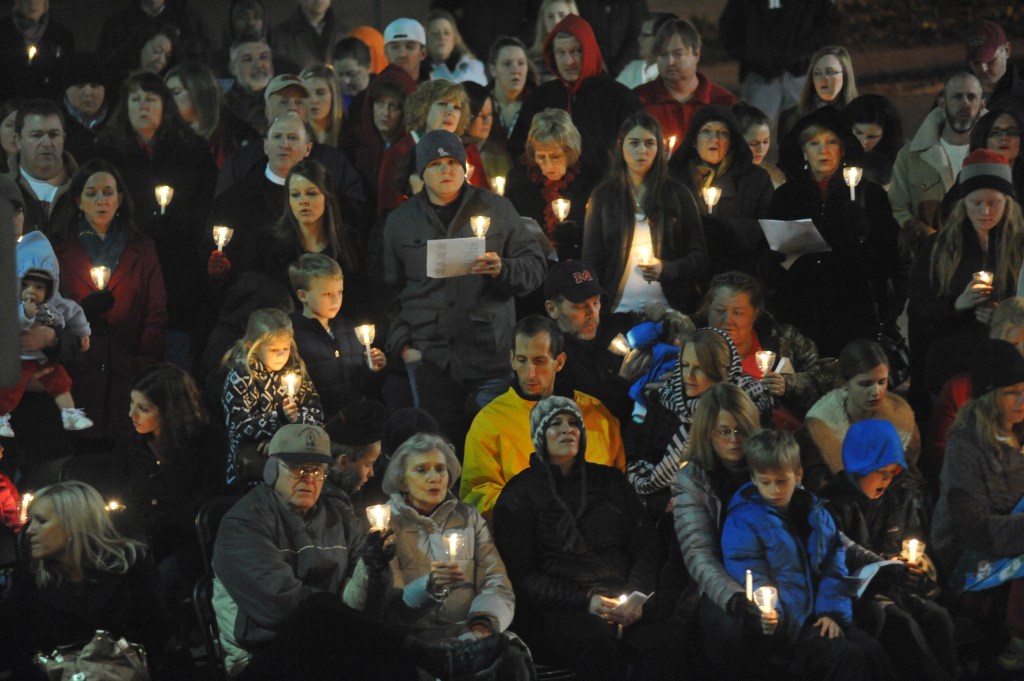 Community Church's Christmas service on the Square in Oxford, Miss. on Wednesday, December 24, 2014.

While doing last-minute shopping on the downtown Square tonight, take some time to usher in the holiday with a candlelight Christmas Eve service on the stage next to City Hall.

Community Church of Oxford is hosting the service and it’s the second year for Christmas Eve service.

Pastor Fish Robinson said the idea came to the church last year as a way to reach out to those Oxonians who are “unchurched” and may wish to attend a Christmas Eve service but do not have a home church to do so.

“A lot of churches hold Christmas Eve services and they’re great,” Robinson said. “We’re not trying to take away from them and what they do. We just thought it would be neat to do something different and hold the service outside.”

The church did little advertising last year for the service and yet, more than 300 people stopped on the Square and grabbed a candle while singing Christmas carols.

“We had tons of people,” Robinson said. “We expect even more this time.”

The service will begin at 5 p.m. on the little stage between City Hall and Square Books Jr.

“We will sing some carols and read from Luke, chapter 22,” he said. “We’ll then hold communion and then pass out candles where we’ll sing more songs”

With the weather being terrible on Wednesday and predicted to be pretty bad Christmas Day, Robinson said so far, the weather reports are showing only a small chance of rain Christmas Eve.

“This is open to everyone in the community,” he said. “We didn’t even put the name of our church on the flyers because we wanted everyone and anyone to feel welcome to join us.”

Robinson said during last year’s service, a mother thanked him for hosting a Christmas Eve service that her special-needs son could attend.

“He apparently had issues sometimes being in a confined environment,” Robinson said. “But he had a blast last year with being out in the open and if nothing else, that made it worth it for us to do it again this year.”

Robinson said the Square is the perfect spot to hold the ceremony due to its beauty at Christmas time.

“I find myself just driving around the Square even when I don’t need to be there, just to enjoy it,” he said. ‘We’re very blessed to live in a town that ups the game on Christmas with its decorations.”

There will be no offering taken during the event, Robinson said.

“This is our way to serve the community and if Christmas is one of the only times someone goes to church, we want to create a comfortable, enjoyable and spiritual atmosphere for everyone,” he said.