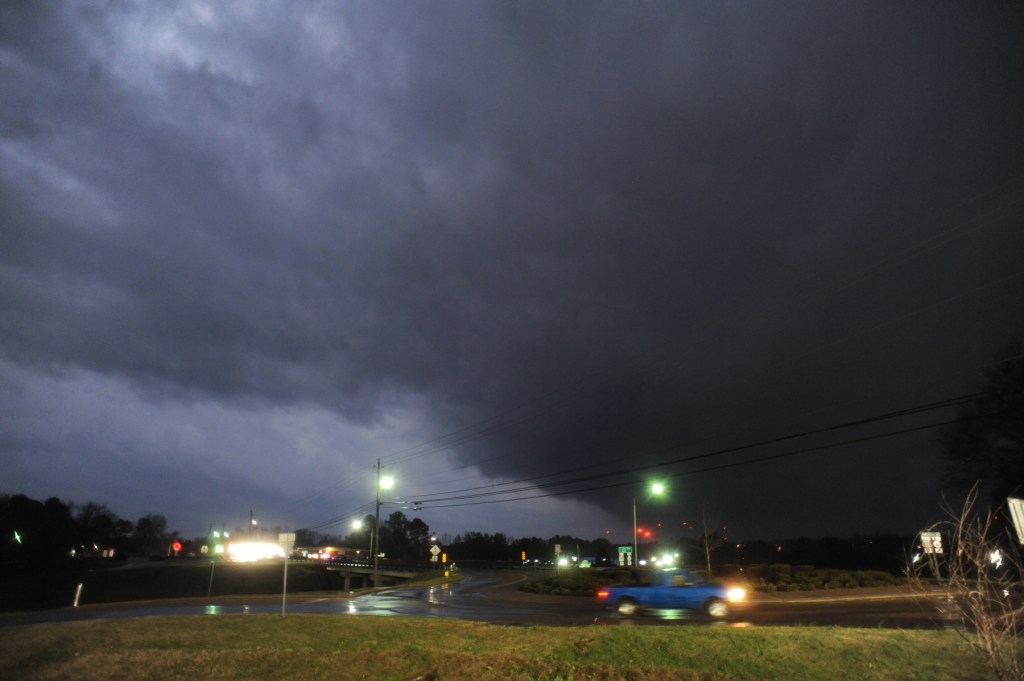 Clouds pass over Oxford near the South Lamar and Highway 6 interchange in Oxford, Miss. on Wednesday, December 23, 2015.

A large tornado that hit Holly Springs Wednesday night demolished buildings, damaged homes and injured residents in a matter of minutes. It also left a 7-year-old boy dead when the car he was in was picked up and thrown.

Almost as quickly, first responders from around North Mississippi started to arrive in Holly Springs to offer help where they could.

Lafayette County Emergency Management Coordinator David Shaw is in Holly Springs this morning helping with damage assessment. Allgood went there after the storm and spent most of the night there.

“The damage I saw was very severer,” Allgood said. “It was a big wide path of destruction.”

Allgood said he’s hearing preliminary reports the tornado, that started around the Delta and bounced its way 130 miles to Holly Springs, was around an EF-3 or EF-4. The Enhanced Fujita Tornado Damage Scale provides estimates of tornado strength based on damage surveys. A tornado is ranked as EF-O, being the weakest, to EF-5, representing complete destruction. The National Weather Service in Memphis said survey crews are out studying damage today and likely will issue a preliminary ruling tonight.

Lisa Coleman, director of the Salvation Army in Oxford, said she and other SA volunteers responded to Holly Springs right after the storm and are back up there this morning feeding emergency responders and clean-up crews.

“I will be loading my car down with food, water, snacks and coffee to carry into Benton County for Ashland search and rescue teams,” Coleman said this morning from Holly Springs. “I have canteens staying in Holly Springs while I am in Benton.”

Local SA volunteers were also in Walnut last night at the shelter feeding refugees and crews there today. She said they were in rescue mode. Once that is complete, the SA volunteers will begin assessing needs of the families affected by the storms.

“People are contacting me and the Salvation Army about wanting to donate things and at this time, we don’t know what the exact needs are, and some people don’t have a home to stay in yet,” Coleman said, who added that money donated in the last couple of weeks during the Kettle Season have helped provide assistance.

“With those donations, we were able to do all the feeding that we are right now,” she said.

Locally, Allgood said there were no reports of damage.

“There were a few tree limbs down,” he said.

As the storm hit Holly Springs at about 5 p.m., thousands of customers were with out power in Oxford and Lafayette County after a Tennessee Valley Authority high-voltage transition line was damaged in Holly Springs that serves three substations locally — one in Woodson Ridge, one in Brittany Woods and one inside the city limits at the Oxford Conference Center.

Hayward said he and 15 linemen were in Holly Springs this morning and will concentrate on getting their customers up and going and then offer whatever help is needed to the Holly Springs electric crews.

Rob Neely with the Oxford Electric Department said this morning that OED has sent a four-man crew with two trucks to Holly Springs.

Allgood said he and other local emergency management personnel will be closely monitoring Thursday’s weather with more thunderstorms expected for most of Christmas Day.

“Right now, we’re not looking at any tornadic activity,” he said. “But some of the storms can be severe and produce some high winds and 1 to 2 inches of more rain.”