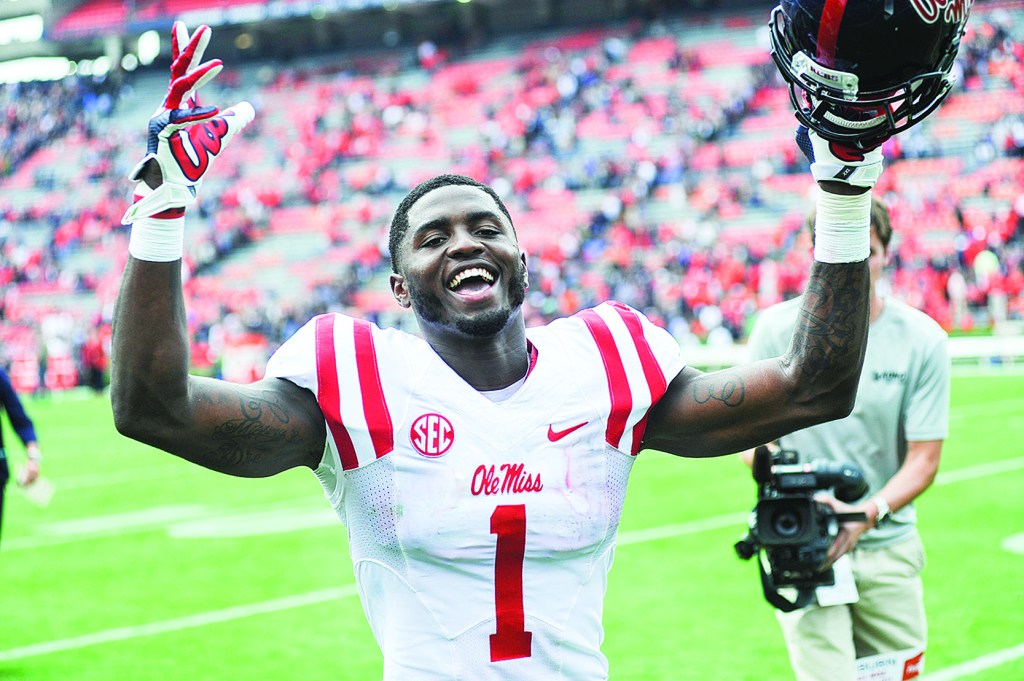 Ole Miss Rebels wide receiver Laquon Treadwell (1) runs off the field following the win over Auburn Tigers at Jordan-Hare Stadium in Auburn, Ala. on Saturday, October 31, 2015. Ole Miss won 27-19 to improve to 7-2 and 4-1 in the Southeastern Conference.

There came a point where Laquon Treadwell knew what he had to do.

As much as Treadwell tried to forget about what happened to him toward the end of last season, the thought lingered in Ole Miss’ star receiver’s mind. Coming back from the broken leg and dislocated ankle against Auburn that ended his sophomore season early, Treadwell was effective for the Rebels’ offense whether he was catching passes or drawing extra attention from defenses to open things up for somebody else.

But Treadwell knew he could do more.

“It was a mental battle for sure. Every week, I was battling my injury,” Treadwell said. “Through the whole year, I’m getting better as the weeks are going on and getting more comfortable.”

Treadwell couldn’t put a number on how healthy he’s felt this season, though he said he’s still not 100 percent. Yet he gradually put together the best season in what’s likely the final one of his college career.

The 6-foot-2, 212-pound Treadwell made his anticipated return in the opener against UT-Martin, catching four passes for 44 yards. He had five catches in each of the next two games and hauled in his first touchdown against Alabama on Sept. 19.

He had his first 100-yard game of the season against Vanderbilt on Sept. 26 and followed that up with an eight-catch, 136-yard showing against New Mexico State two weeks later with two touchdowns, including a one-handed, highlight-reel grab along the sideline.

But it wasn’t until the following week against Memphis that Treadwell let everything go.

Treadwell set a school record with 14 catches for a career-high 144 yards and a score while also throwing a touchdown pass. Treadwell was one of the lone highlights for the Rebels that day in a 37-24 loss, but it served as a reminder for the team and himself that he was back to being one of the best players on the field every week.

“I was just like, ‘I’ve got to go all out. Whatever happens happens,’” Treadwell said. “I just started playing at a higher intensity, believing in myself and trusting myself to make those plays. It started happening.”

He went on to put together five straight 100-yard receiving games and six straight with a touchdown reception, including a 21-yard clincher in the rematch against Auburn, both of which are schools records. Treadwell is the Southeastern Conference’s only 1,000-yard receiver with a career-high 1,068 yards and is the league’s active leader in receiving yards (2,322), catches (196) and TD receptions (18).

“At the end of the year, I just caught a roll and a rhythm,” said Treadwell, who was a Biletnikoff Award finalist this season. “I was playing at a high level, and the plays were coming.”

One last hurrah?
He needs just three catches and 68 yards against Oklahoma State in the Sugar Bowl to become the school’s career receptions leader and single-season yardage leader before likely heading to the NFL. Treadwell, who’s widely projected to go in the top half of the first round in next year’s draft, could be the first receiver taken should he leave early.

“I’d have to say he is the most talented (receiver) that I have ever coached,” Ole Miss coach Hugh Freeze said.

Treadwell has not made a decision about his future publicly, but if New Year’s Day is the last time he dons an Ole Miss uniform, he wants it to be like so many of the other performances that helped the Rebels get to this point.

“It’s a legendary moment for us,” Treadwell said. “We’ll be remembered forever for beating Alabama and all the top teams in the SEC West and then winning the Sugar Bowl at the end of the season, so that’s something we look forward to doing and keeping the momentum rolling.”

END OF AN ERA: Rebels send Tad Pad out…