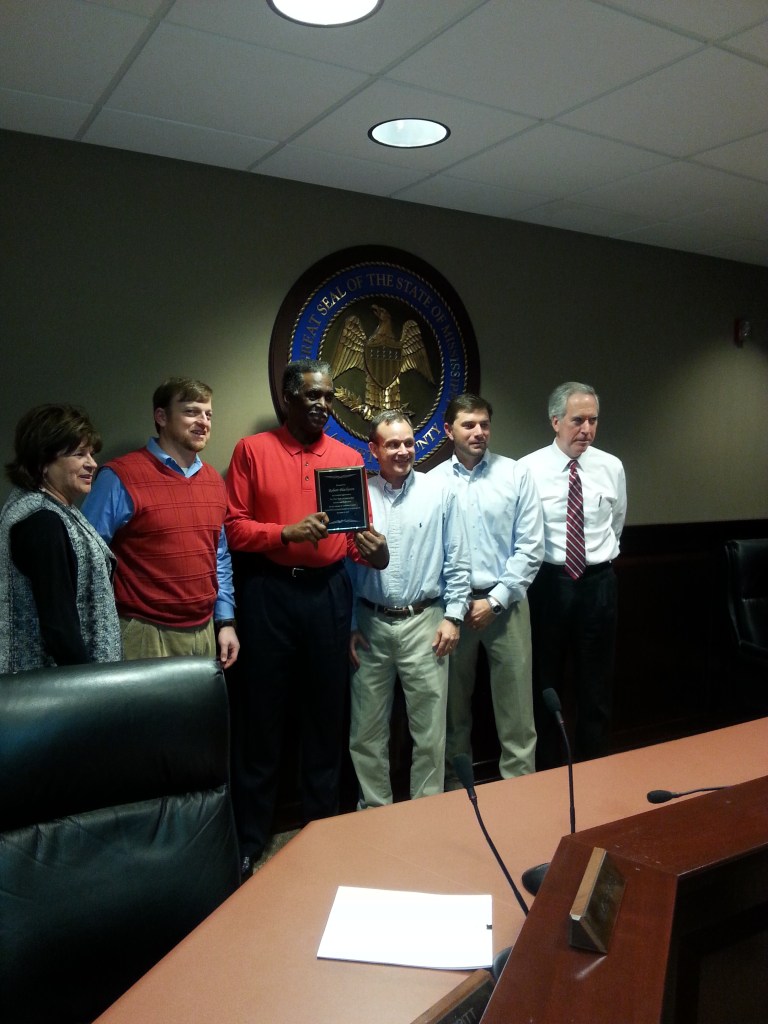 Robert Blackmon holds a plaque he received for his years of service to Lafayette County while surrounded by fellow county leaders last week.

For the final time, Robert Blackmon attended a Lafayette County Board of Supervisors meeting as the representative from District 3.

Blackmon, who did not seek re-election this year, is retiring from public service after serving the county for 30-plus years, the last 19 as a county supervisor.

David Rikard, who was elected to the District 3 seat, was sworn in last week to replace Blackmon.

Fellow board members spoke highly of Blackmon and honored him with a plaque for his dedicated years of service. The board also honored Mike Pickens with a plaque. Pickens, who was not in attendance for Monday’s meeting, also did not seek re-election in District 1. Kevin Frye, who was also sworn into office, won election in November to claim the supervisor seat.

Board president Jeff Busby praised both Blackmon and Pickens for their years of service to the county.

“It’s been a pleasure to work with both of them,” Busby said Tuesday.

Also before closing Monday’s meeting, each board member praised Blackmon personally for his commitment as a supervisor for nearly 20 years.

“He can’t be replaced,” Busby said. “His service is something you can be very proud of and we are certainly proud of you. We’ve certainly enjoyed serving with you and we’re going to miss you.”

Busby said Blackmon has been a confidant over the years when he has needed to vent.

“He has calmed me down many times,” Busby said.

Supervisor Mike Roberts, who brought an old copy of The Oxford Eagle to Monday’s meeting that included a photo of Blackmon in the ’80s, said, “your picture has changed, but you haven’t.”

Blackmon, who also served as a deputy sheriff and constable for the county, has been working in some capacity in public service since 1984.

“I’m very humbled,” Blackmon said. “I appreciate all these guys and what they do.”

County attorney David O’Donnell has worked the longest with Blackmon. The two have been on the board for the last dozen years.

“It’s been an honor and privilege to serve with you and I regard you as a friend more than anything else and that won’t change,” O’Donnell said.

Blackmon is proud of several achievements within the county that were accomplished during his tenure, but pointed out the construction of the Chancery Building and the sale of the hospital.

“I’ve worked with five different boards,” Blackmon said. “We’ve got money in the bank. The county is in great shape. I am leaving it in great hands. I am proud of these guys.”

Blackmon said his immediate plans are to spend time with his family and grandchildren.

“Just taking it easy for a while and playing with the grandkids,” Blackmon said. “Just enjoying life.”