Construction on new county fire station ahead of schedule 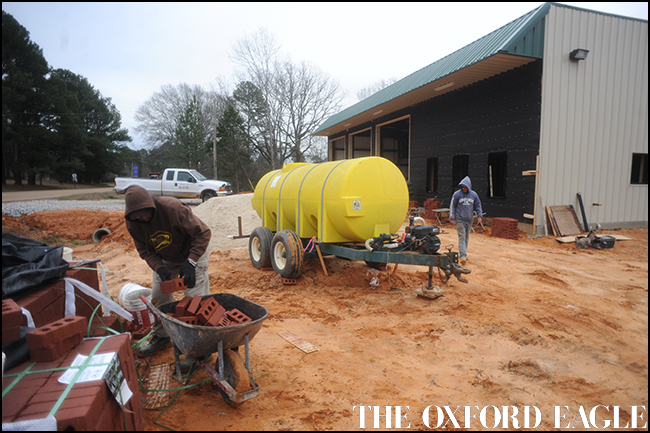 Progress continues ahead of schedule on the new fire station currently under construction on Highway 30 east.

Lafayette County Fire Coordinator Jerry Johnson said Monday work on the nearly $400,000 facility is moving along well and it is hoped it will become operable sooner rather than later.

“He’s probably 30 days ahead of schedule right now,” Johnson said of the contractor, Heritage Builders in Oxford. Deadline for construction is April 1, but “he could be through in the early part of March. Unless we hit some bad weather.”

Johnson said installing the sewer system and pouring the concrete driveway could be the only delays caused by the weather.

According to Johnson, all of the interior walls are up, electrical installed, rough plumbing is in, duct work and gas lines are being run, the brick is on-site for the exterior, water lines are set, appliances and cabinets have been ordered, as well as the bay doors.

“I suspect when it dries up they’ll be back out there again after the first of the year to try and get it closed up,” Johnson said. “Once they get the bay doors hung and get some heat in there, they can start to hang sheetrock. The finish work takes a long time, but they’re moving right along.”

Johnson said the work is being complete within the $389,000 budget for the facility. He said he is anticipating possibly one change order when the flagpole was not included, but he said that might also be done outside the budget.

“We may actually have a reduction in some things,” Johnson said.

“This one is just a couple feet larger,” Johnson said, adding the difference is the station on Highway 6 does not have brick.