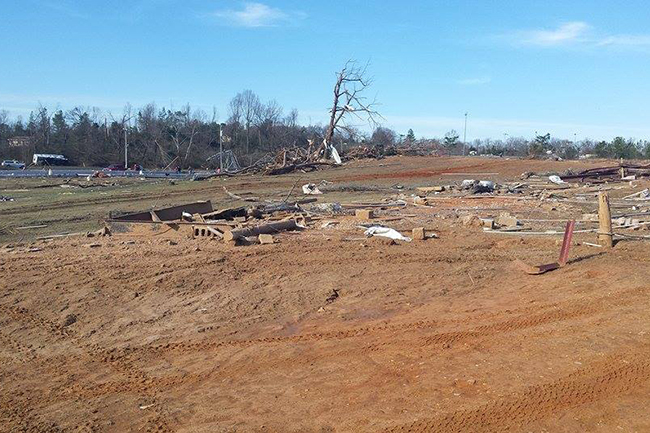 Carol Forsythe Damage to Carol Forsythe’s home in Holly Springs is reflective of what the community is facing, as well as the overwhelming gratitude for help received after the storms.

Terry and Carol Forsythe’s dogs Lizzie and Gabbi bring them joy and companionship. When an EF-4 tornado hit Holly Springs last week, they also may have saved their life.

The couple took their dogs to the groomer in Ashland Wednesday before the weather started to get bad. On their way back home, their phones started alerting them that there was a tornado warning for Holly Springs.

They live on the grounds of the Holly Springs Race Track where Terry manages the track.

“We pulled into Cousin’s Shell and went into their oil pit to wait out the storm,” Carol Forsythe told the EAGLE Monday.

After the danger had passed, they drove to the track that had been leveled by the storm. But the shock didn’t really sit in until they saw that their own home was also demolished.

“Everything was gone,” she said.

Forsythe doesn’t need to be reminded of what could have happened if the couple were at home with their dogs when the tornado hit.

“They saved our lives,” she said.

Not knowing where to go, the two returned to Cousin’s Shell where the owner allowed them to stay for a while and gave them phone chargers so they could reach family and friends.

Friends David and Pat Glidewell brought in a trailer to the track so the Forsythes could stay near the wreckage of their home to prevent looters and give them a place to stay.

“Numerous people started bringing us clothes, money, food,” Carol said. “We are beyond blessed. The compassion everyone has shown us is just overwhelming.”

Forsythe grew up in Oxford and graduated Oxford High School in 1986. She works at the University of Mississippi as a senior administrative assistant.

“Colleagues have been stopping by or texting me to see what we need,” she said. “We are so grateful for everything that’s been done for us and that people are continuing to do for us.”

The couple has lived at the racetrack for about four and a half years.

As they still rummage through the remains of their house, Carol said they haven’t been able to save much.

“We found a few shirts and two or three pairs of my husband’s pants,” she said.

Along with help from friends, family and coworkers, Carol said the racing community has also been very generous to her and Terry.

“They have gone above and beyond,” she said. “It’s really hard to put into words how we feel, but we’re just stunned and so very thankful.”

THE DART: Williams enjoyed growing up on a farm,…