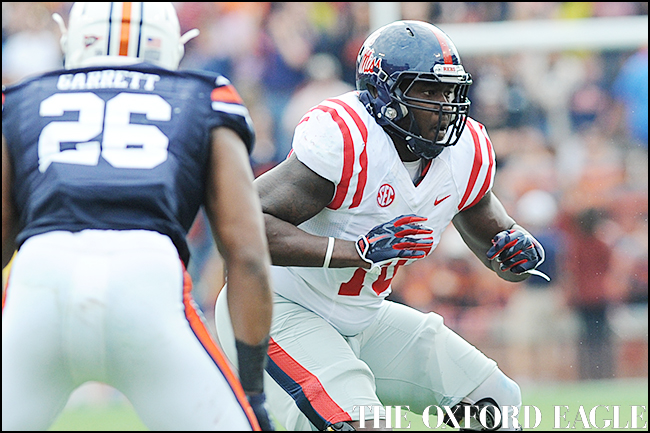 NEW ORLEANS — The Southeastern Conference versus the Big 12.

It is a potent mixture that could result in an offensive combustion on the field inside the Mercedes-Benz Superdome on Friday when Ole Miss takes on Oklahoma State in the Sugar Bowl (7:30 p.m., ESPN).

The Cowboy offense, led by dual quarterbacks Mason Randolph and J. W. Walsh, will get its chance to put up points. The question is can Ole Miss’ offense keep pace?

It is a battle of two of the top offenses in the country, but the 12th-ranked Rebels (9-3) will have to get past a beast at defensive end in Emmanuel Ogbah and cornerback Keven Peterson.

Ogbah, a 6-foot-4, 275-pound redshirt junior, has been a force to be reckoned with inside the trenches for Oklahoma State (10-2), racking up 61 tackles with 42 of those unassisted. He also forced three fumbles — two against West Virginia and one against Baylor — while recovering two fumbles.

It will be a marquee matchup at the lines as NFL-draft prospect Ogbah will be across from another NFL prospect in Ole Miss left tackle Laremy Tunsil.

Tunsil is up to the challenge as his first game back from a seven-game suspension was against Texas A&M and defensive end Myles Garrett.

Tunsil and whoever else is in charge of Ogbah will have their work cut out for them as the Houston native is responsible for 13 sacks on the season.

“He is a really good player and we have known that,” Ole Miss quarterback Chad Kelly said of Ogbah. “We need to make sure that we know where he is at all times on the field and have to account for him.”

If Kelly is able to get off a pass against Ogbah and the rest of the Cowboy defensive front, his prime target in Laquon Treadwell will have to maneuver past Peterson, another marquee matchup with future NFL players.

Peterson played in 11 games during the regular season, accounting for 31 tackles and one interception. He also had one pass breakup and recovered a fumble.

“They are all about the same when it comes to athleticism,” Treadwell said of the Oklahoma State secondary. “Mobile and quick and they love to play the ball. I can’t get into what I would do differently against (Peterson). I have to attack his tendencies, of course, but I need to play my game. I need to know what I can do on certain plays.”

The idea of a fast-paced Rebel offense being able to slow down the Cowboys defense is a school of thought that is logical, but the evidence suggests it will be a moot point.

Ole Miss ran 880 plays on offense during the regular season, which is 52 plays less than the Oklahoma State defense spent on the field.

The time of possession is on equal footing as well as Ole Miss averaged more than 26 minutes on the field per game. The Cowboys’ defense averaged 30 minutes per game.

“They feel like they play more in the Big 12,” Ole Miss offensive lineman Fahn Cooper said. “I think that may be true because I know in the Big 12, most teams run an offense kind of like ours. They make people play a lot of plays. … Fatigue is something that’s going to settle in for everybody and so are injuries.”

BACK TO BUSINESS: Rebels report to New Orleans for…