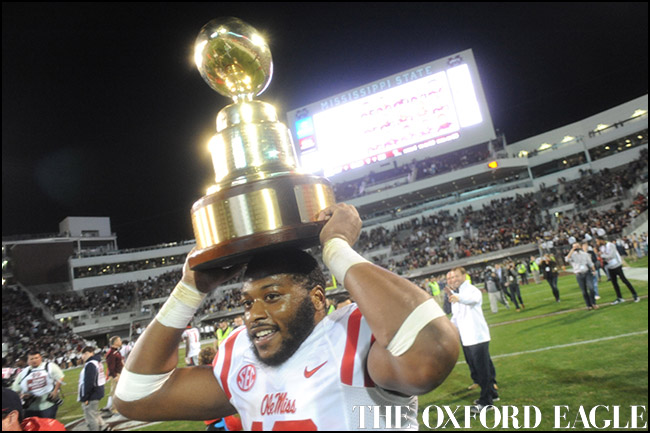 NEW ORLEANS — For four years, Mike Hilton and C.J. Johnson have taken the field for Ole Miss as teammates. This Friday night will be the bookend on what has been an up-and-down career for both.

Johnson’s first year was the 2011 campaign that saw the Rebels win only two games, a season he and most would like to forget. It was also a season that made Johnson question whether he wanted to stick around or not.

Enter Hugh Freeze, who replaced Houston Nutt in December 2011 and completely changed the culture and environment of the Rebels’ locker room. It was enough for Johnson to decide to stick it out and give Freeze a chance.

“I actually bought in to everything coach Freeze was telling us,” Johnson said. “It was a point midway through spring practice I was just like, ‘We could be really good at this.’ We just stuck with it and everybody just stayed so committed to what he was trying to do and it’s why we’re (at the Sugar Bowl).”

Johnson toying with the idea of transferring after his first season was unbeknownst to defensive coordinator Dave Wommack.

“I’m glad I didn’t know,” Wommack said, laughing. “What a cornerstone he’s been for us.”

Johnson is playing in his fifth year after earning medical redshirt after missing all but four games during the 2013 season due to an ankle injury that required surgery.

Hilton arrived on the scene in 2012 and has been an important piece of the Rebel defense, playing at every position in the defensive backfield.

The Fayetteville, Georgia, native saw the turnaround begin in Freeze’s first year when the Rebels went to the Compass Bowl — now renamed the Birmingham Bowl — and credits Freeze’s 2013 star-studded recruiting class that included Robert Nkemdiche and Laquon Treadwell as the moment the buy-in was complete for the newcomers and the players already in the locker room.

“After that 2013 class came in, it was a stepping stone for us,” Hilton said. “He was doing something special to get those kinds of players in here after just one year and finally getting a winning record. Just getting those guys down here really changed this program.”

The journey began in Birmingham, Alabama, and is concluding in New Orleans for the Sugar Bowl, considered one of the top four bowl games in history. For two players that have seen the highest of highs and experienced the lowest of lows, it is all about enjoying every minute this week.

“I’ve been soaking every moment in,” Hilton said. “I’m ready to get this last moment over with, but it’s still a bittersweet feeling.”