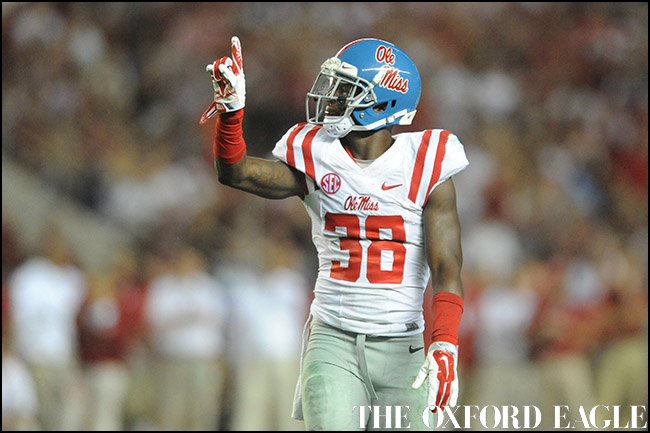 Bruce Newman Ole Miss defensive back Mike Hilton (38) and the Rebels defense will face an Oklahoma State squad that features two quarterbacks when the teams meet Friday night in the Sugar Bowl in New Orleans.

NEW ORLEANS — For nearly a month, the Ole Miss defense has been preparing for either Mason Rudolph or J.W. Walsh.

That is because the Rebels are not sure if they will see Rudolph, Walsh or both under center for Oklahoma State inside the Mercedes-Benz Superdome on Friday in the Sugar Bowl (7:30 p.m., ESPN).

Rudolph injured his ankle during the Cowboys’ game against Baylor on Nov. 21. He was seen in a walking boot after but did participate in the Cowboy’s regular-season finale against Oklahoma and attempted only three passes for zero yards.

Walsh got the start against the Sooners and completed 25 of 42 passes for 325 yards, two touchdowns and one pick.

It has been more than a month since Rudolph injured his ankle, and Ole Miss is convinced it will see both at some point Friday night. The Rebels (9-3) are using their experience in the 2013 Music City Bowl as guidance.

“During the season, (Oklahoma State’s) strength has been throwing the ball,” Ole Miss defensive coordinator Dave Wommack said. “It’s kind of been like getting ready for Georgia Tech. … It’s certainly an advantage playing that type of system when you have more time to prepare in practice than you would in a normal week. You’re totally shifting gears and running a totally different scheme against them.”

Whichever quarterback the Rebels will be across from poses a threat to move the ball down the field and in big chunks. The Cowboys have had 67 explosive plays that went for 20 yards or more, and 15 of those passes went for a touchdown.

Rudolph and Walsh have combined for 34 touchdowns, and their longest throws have gone for 82 and 73 yards, respectively.

When healthy, Rudolph has been Oklahoma State’s main signal caller while Walsh has been used primarily as the short-yardage, situational quarterback.

“We’ve just been taking real good looks at both of them,” Ole Miss defensive back Mike Hilton said. “We’re preparing for both and whoever plays we’re comfortable going against them, and we’re just going to run our scheme.”

Hilton echoed what head coach Hugh Freeze said earlier this month that the Cowboys offense reminds the team of the Texas A&M scheme they saw this year. During the Oct. 24 23-3 win, Ole Miss held the Aggies to 192 total yards. It was the fewest yards by an opponent at that point of the season. A&M had a dual-quarterback system that night which the Rebels limited to 134 yards through the air and zero touchdowns.

“They’re an up-tempo team,” Hilton said. “They like to take shots down the field. Their run game is solid and do things to mix the offense up.”

Oklahoma State offensive coordinator Mike Yurcich would not comment if Rudolph will start or even see action but only would say he is “doing his best” to prepare for the game.