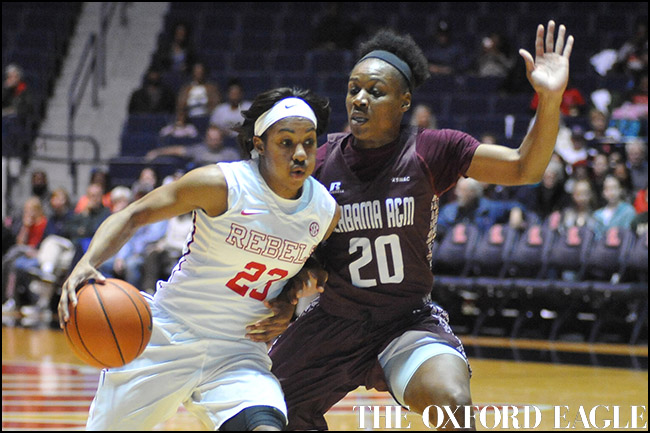 OXFORD — The Ole Miss women’s basketball team (8-5) closed out the non-conference slate with a resounding 103-42 win over Alabama A&M on Tuesday night. Junior Bretta Hart posted her first career 20-point outing while adding a team-best nine rebounds in the win.

Holding a 58-18 lead heading into the third quarter, Ole Miss went to its bench and used 56 points from the Rebels reserves, including 20 from the game’s leading scorer Hart, cruised to its second consecutive victory.

Ole Miss jumped out to a 14-4 lead behind two triples from Torri Lewis and forced the visitors into four turnovers and held them scoreless for nearly six minutes. The home team made the most of turnovers in the first quarter, forcing Alabama A&M into seen early turnovers and owning a 9-0 advantage in point off turnovers as they scored 49 points off of A&M miscues, while forcing a season-high 40 turnovers.

Led by 10 first-quarter points from Sisk, her second straight game in double figures, Ole Miss took a 31-8 lead entering the second quarter, marking the third time in the last four games Ole Miss has scored 30 or more in the first quarter. Behind the strength of 51 percent shooting (25-of-49), OIe Miss took a 58-19 lead at halftime.

Ole Miss didn’t let up in the second quarter, forcing the visitors to take a time out just three minutes into the quarter. Hart was impressive off the bench in the second quarter with 14 points — her first game in double figures this season — en route to a career-high 20 points.

Coach Matt Insell was pleased with the effort and win over Alabama A&M (1-9).

“Dominating performance there. I’ve watched them on tape and every game they’ve played has been close,” Insell said. “Their record isn’t very good, but they’ve been in a lot of close games. I challenged our girls to hit them hard from the start, and that’s what they did. They played extremely well, and that’s just what they needed going into conference play. There is a lot of confidence on this team, and this young team is growing up.”

“We lead the nation in offensive rebounds, we’re top-five in the country in forced turnovers and there’s so much this team is doing to make such progress in our three years,” Insell said.

Next up, Ole Miss begins SEC play when they host Vanderbilt Sunday at 2 p.m. in their final game in the Tad Smith Coliseum.