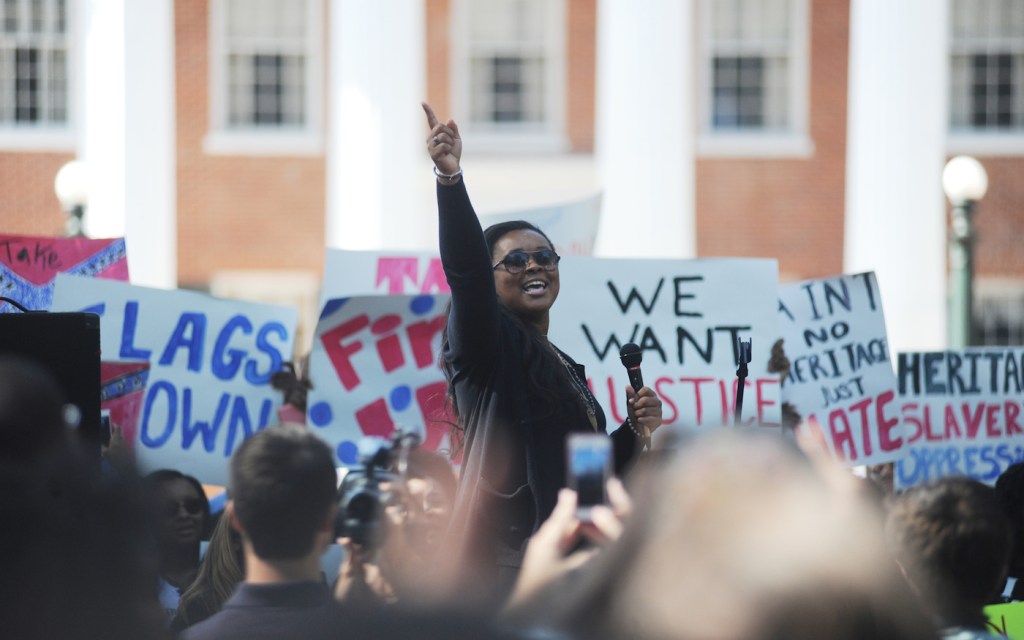 Sunny Fowler speaks during a rally calling on the University of Mississippi to remove the Mississippi state flag from university grounds, in Oxford, Miss. on Friday, October 16, 2015. (AP Photo/Oxford Eagle, Bruce Newman)

The top story of 2015 started to surface in late spring, when a white man in Charleston, South Carolina, shot and killed nine black people at a church. The shooter had previously posed with a Confederate battle flag in photos posted on social media sites.

That event sparked heated debate across the state and locally amongst Oxford and Lafayette County residents as well as on the campus of the University of Mississippi as to whether the Mississippi state flag should be taken down until a new one was approved by the state Legislature. The state flag carries the Confederate battle symbol in its design.

The Oxford Board of Aldermen took the lead locally and in August, it voted unanimously to remove the state flag from city-owned property.

“A flag that 40 percent of the state’s population doesn’t support really doesn’t represent our state, does it?” Patterson said recently. “I respect the history of the flag and the feelings of those who support it. But it’s time to get behind a symbol we can all support.”

Patterson conceded that the board could have taken more time to hold more public meetings about the subject in hindsight.

“But I still believe the board made the right decision,” he said.

Oxford Sons of Confederate Veterans, University Greys Camp No. 1803 member and past president Jon Rawl said the flag serves as a memorial of those who died during the Civil War.

“The Mississippi state flag of 1894 was designed as a memorial to the nearly 10,000 Mississippians who died defending the state in the war between the states,” Rawl said. “The flag referendum in 2001 was resounding affirmation, 65 percent in favor, of the historic flag. I’m confident the vast majority of Mississippians still believe in our flag, and have not been persuaded by recent events outside of the state’s borders that it should be changed.”

Rawl said locally, many flag supporters are offended by the “politicized, knee-jerk reaction to lower the flag” in Oxford and the Ole Miss campus.

A couple of weeks before the aldermen took the state flag down, local black Confederate activist Anthony Hervey was killed while coming home from a Save the Flag rally in Alabama when his car overturned and flipped several times. His passenger, fellow activist Arlene Barnum, claims they were being chased by a car filled with black men who were angry, possibly after seeing Hervey at a gas station they stopped at just before the wreck. Hervey was wearing a hat with the Confederate flag on it, according to Barnum. Several Confederate organizations came to Oxford for the funeral and marched around the Square with Confederate flags waving. The Mississippi Highway Patrol has not arrested anyone or named any suspects in the crash.

When Ole Miss decided to remove the state flag in October, more protests ensued on campus.

A student-led resolution had been calling for the flag to be removed. The student senate, faculty senate and other groups all adopted resolutions to remove the flag, which was taken down on Oct. 26 and placed into the university’s archives.

Days before the university took the flag down, people gathered on the university to rally for the change, while others came to fight the change. Two of those people wound up in jail after University Police officers found two guns in their vehicle. The International Keystone Knights members, Kyler Campbell and Virgil Dennison, were handcuffed and led off campus. They carried signs that read, “If diversity wins, we all loose,” and “Black Lives Don’t Matter.” After being escorted to their vehicle, the officers found the guns in the back seat of their vehicle.

The flag was first adopted by Mississippi in April 1894, replacing the flag that had been adopted in 1861. The flag was subsequently repealed in 1906 and readopted in April 2001. Mississippi’s state flag is the last one to have the Confederate battle symbol on it since Georgia adopted a new flag without the symbol in 2003.

In October, Gov. Phil Bryant said he wants to see the flag issue on the 2016 ballot, but that he’s not pushing for change. He said the flag is getting a lot of debate and that voters should have the chance to express their views through voting.

Because of Mississippi’s initiative law, the soonest any outside group could get the issue on the ballot is 2018. However, the Legislature could set an election on the issue whenever it wants.

“I’d like to see the Legislature put it on the ballot in the presidential year, for a number of reasons,” Bryant said. “That’s the largest turnout we have in Mississippi.”

“It might be time to let people vote again.”