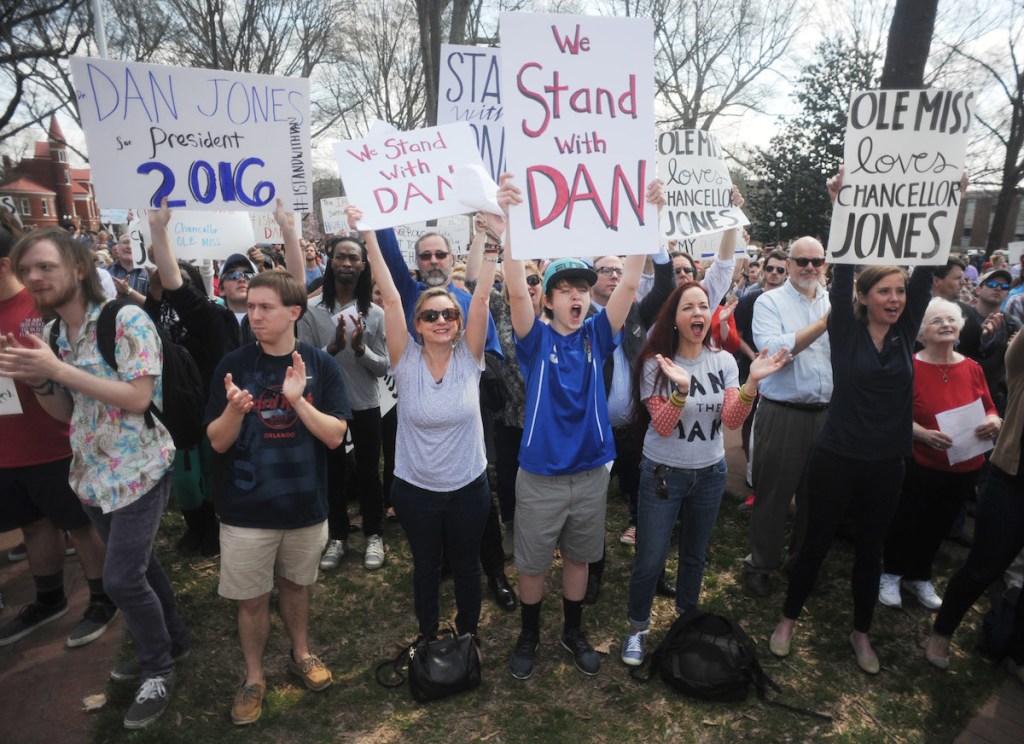 Supporters of University of Mississippi Chancellor Dan Jones rally in the Circle on campus, in Oxford, Miss. on Wednesday, March 25, 2014. Last week, Mississippi's Board of Trustees of State Institutions of Higher Learning declined to renew Jones' contract, which expired on September 14, 2015. (AP Photo/Oxford Eagle, Bruce Newman)

In Oxford, however, former University of Mississippi chancellor Dan Jones was the 2015 Newsmaker of the Year — albeit not by his own doing.

In March, the Board of Trustees Institutions of Higher Learning decided to not extend Jones’ contract and voted to begin the search for a new chancellor. The board cited concerns about financial issues at the UM Medical Center.

Jones’ said he felt it was due to his expressing concerns and disagreeing with the board in some areas, including the funding allocation plan that distributes state funds to various public universities, business issues at the medical center, and responsibility for managing the selection process for the position of vice chancellor to lead the medical center.”

Once the news got out that the largely popular Jones would no longer be chancellor after his contract ran out in September, students and alumni started websites, Facebook pages and turned to Twitter to express their disappointment. An official group coined themselves, “I Stand with Dan.” Buttons and T-shirts were made. But their objections fell on deaf ears and the IHL did not change the decision.

Many university staff and faculty also expressed their disappointment with IHL.

“For me professionally and personally, it’s sad because we love Dan Jones and his leadership, his style and his personality,” said Athletic Director Ross Bjork after the announcement that Jones’ contract was not going to be renewed. “He’s the reason I took the job at Ole Miss. I knew he was a leader who cared about athletics and understood the importance of it.”

More than 2,500 signed a petition submitted to IHL to extend Jones’ contract.

Curtis Wilkie, an Overby Fellow, said at the time that Jones’ “firing” reminded him of when former Gov. Theodore G. Bilbo fired the chancellor and several others in Ole Miss leadership in the 1930s.

“This smacks of the whole thing all over again,” Wilkie said in March. “I think people are very, very angry and this has the potential for a real firestorm.”

Many were angry, including Oxford’s local legislators, former Rep. Brad Mayo and Sen. Gray Tollison who introduced legislation in late March that called for the break up of the IHL and allowing each university to have its own board of trustees and turn the current state board into a board of governors who would oversee universities statewide but would not be in control of individual university decisions.

The legislation failed since it was submitted so late in the session but Tollison said he wanted the conversation to continue during the 2016 session.

A few weeks later, the IHL announced the formation of a 34-member Campus Search Advisory Committee and a Board Search Committee, made up of all 12 members of the state college board who worked with education search firm, R. William Funk and Associates to find a new chancellor.

The SAC committee was headed up by Alice Clark, vice chancellor for research and sponsored programs. Clark served as chair in 2009 when Jones’ was hired as chancellor. The committee received about 50 applications and eventually got it down to a handful of promising candidates.

In the meantime, Jones’ “retired” early from his job as chancellor at Ole Miss and accepted a job at the UM Medical Center as director of clinical and population sciences where he will lead the development of clinical obesity research programs.

“This is a welcome opportunity for the next stage of my career,” Jones said in June in a press release from the medical center. “Over the last several weeks, I have explored several good opportunities in universities outside Mississippi.

“As I examined options, it became clear to me that my first priority was to seek a position where I could work on important issues where there was a real need. The invitation to fill this position in the center allows me to do this in the state of Mississippi I love so much.”

In October, the IHL announced they had hired a new chancellor. Dr. Jeffrey S. Vitter, renowned computer scientist and academic leader who was serving as provost and executive vice chancellor at the University of Kansas when he accepted the job as Ole Miss’ new president and chancellor.

“Dr. Vitter is, without a doubt, an exceptional academician and researcher. He is also an experienced and very successful academic leader,” said Alan Perry, president of the Board of Trustees of State Institutions of Higher Learning, in a press release. “However, it is his vision and passion for the University of Mississippi that is most compelling. I am confident this vision, coupled with his ability to lead the process of developing and implementing strategic plans, will help take the university to an even higher level of stature and prominence.”

Vitter is expected to start his new job at Ole Miss today.