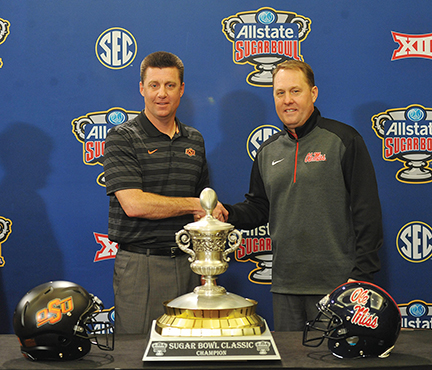 NEW ORLEANS — Hugh Freeze and Mike Gundy have had fun this week. So have their players.

But Ole Miss and Oklahoma State are ready to get down to business.

The 12th-ranked Rebels (9-3) don’t have much longer to wait to tangle with No. 16 Oklahoma State (10-2) at the Mercedes-Benz Superdome tonight (7:30, ESPN) after a week full of other events that come along with every bowl trip. The teams have sprinkled dancing, bowling and trips to a local World War II museum and children’s hospital around their preparation for the game since arriving in New Orleans on Saturday.

“Our hospitality has been tremendous,” said Gundy, who’s wrapping up his 11th season as Oklahoma State’s coach. “Our players have had a great four or five days.  We have really enjoyed the food, the people, and looking forward to another day of preparation and then getting ready to play in the game.”

The Rebels had a rigorous workout after arriving Saturday night to serve as a reminder, Freeze said, of why they’re here after laying an egg in their first-ever New Year’s Six bowl a year ago in the 42-3 Peach bowl loss to TCU.

“We’ve had a good time, but as the festivities continue to build with the Rebels coming into town, we hopefully can keep our kids focused on the task at hand,” Freeze said. “That’s winning the Sugar Bowl.”

The challenge for each team will be finding ways to slow down the other’s offense in a matchup that pits two of the nation’ top 11 scoring offenses and two of the top 10 passing offenses against each other. Ole Miss’ Chad Kelly and Oklahoma State’s Mason Rudolph have each thrown for more than 3,500 yards and 20 touchdowns while the Cowboys change up the pace at times under center with senior J.W. Walsh, who’s run for 11 of the 24 touchdowns he’s been responsible for this season and provided a spark to a running game that ranks 109th nationally (132.2 yards per game).

“The way (Gundy) has smoke-and-mirrored his way to 10 wins in regards to the run game has been very impressive,” Freeze said. “The way they create extra gaps and are always creating new things with motion, it creates problems for your fits defensively. He’s done a nice job with that.”

One big piece missing in the middle of the Rebels’ defense will be defensive tackle Robert Nkemdiche, whose college career is over after being suspended following his fall from an Atlanta hotel room and subsequent charge of marijuana possession earlier this month. Breeland Speaks and D.J. Jones will fill in tonight.

Gundy believes the Rebels’ depth is capable of picking up the slack.

“It’s a talented group,” Gundy said of Ole Miss. “We will need to play our best game and put ourselves in position to have success based on the talent level that Ole Miss has in this game.”

The game has the making of a shootout on paper, though Gundy pointed out that the extra time teams have to prepare for bowl games has a funny way of producing the unexpected.

But the teams are ready to find out how it all plays out.