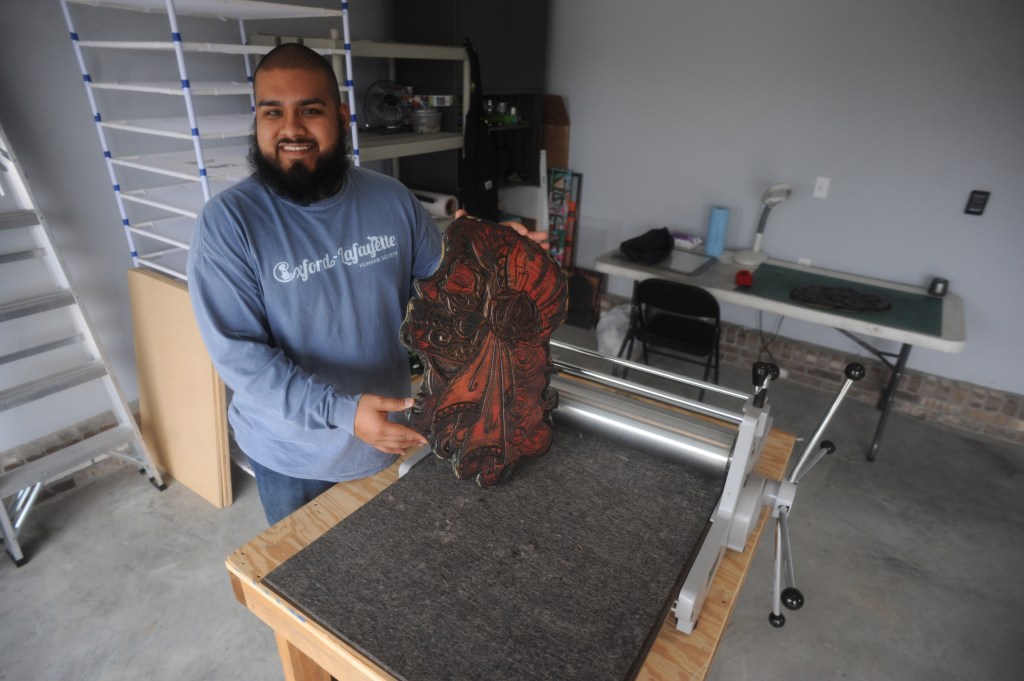 If you ever have eaten at Volta and looked at the walls or attended the 2015 Double Decker Arts Festival, you’ve seen some of Frank Estrada’s work.

The 26-year-old Memphis native specializes in etchings, and his work is gaining popularity in the local community and beyond.

Estrada moved to Oxford in 2007 to attend the University of Mississippi and finished with a bachelor’s of fine arts with an emphasis on print-making and another degree in sociology. He uses that background to work at the university in the athletics department, archiving sports memorabilia for the school by day, and by night and weekend he’ll work on art in his garage.

“I try to do it as much as I can, but working an 8 to 5, you just come home and have to take care of business as far as making dinner, taking the dogs out, waiting to eat dinner, and by the time you’re done it’s already late and it’s time to go to bed and start all over again,” Estrada said.

But when he gets out there and into the zone, he’ll keep going — whether it is a weekend or a school night. He’ll work through the night until 2 or 3 a.m. if necessary.

“The most recent work that I’ve been working on are things that inspire me around here like Southern culture,” he said. “I’ve had a lot of cotton fields, crawfish, things that focus around Oxford as far as Eli Manning and Archie Manning and William Faulkner, Rowan Oak, Walk of Champions, things like that. I also do a lot of Day of the Dead.”

One of Estrada’s more recent etchings involved lino cuts for demonstrations. Lino cuts are similar to wood cuts, but they are made out of linoleum. Estrada said they are easier to cut into and cheaper, so he’s done smaller ones as projects for the Girl Scouts and the University Museum.

His etching process entails coming up with an image and sketching it out on paper. Then he uses a projector to project the image on to a piece of wood. He traces it on to the wood with pencil and then goes back with a Sharpie, then covers it in black tempera paint. When he makes the carving or cuts, he will see what it will turn into when printed. He seals it with a polyacrylic or shilack, so when he puts ink over it, it doesn’t soak into the wood. That way it can be reused repeatedly. He runs it through the etching press or hand-brandishishes it with a spoon or a baren.

He’s done a few commissions for businesses and nonprofits, including the Oxford-Lafayette Humane Society. One was for Satchel’s Pizza all the way down in Gainesville, Florida.

“He saw me at one of the beer festivals here in town and contacted me after he was home and wanted me to come up with a design,” Estrada said. “So I did that and then a nonprofit in Birmingham called Urban Purpose contacted me and I went ahead and created them a shirt. I printed front and back for them.”

Estrada’s community involvement started to take off when he was selected to create the Double Decker festival poster for print in 2015.

“The festival organizers started asking for submissions around town,” he said. “They called me in because I was the only artist who turned in sketches instead of final pieces. I went in, they picked one and they said, ‘we want you to run with this one.’  So I went ahead and tidied it up a bit, added color. I did one called a reduction wood cut, or a suicide block, as you carve away each color so at the end you only end up with a black outline. It turned out too dark, so I redid it and painted it by hand, each color, and that’s how the 20th anniversary print/poster happened.”

In the summer he participated in the Fringe Festival with the Yoknapatawpha Arts Council where art was created using a steam roller in a parking lot.

“I guess it was the first one ever for here in Oxford,” he said. “I’m pretty much new to it, so I kinda want to bring it back next year and maybe do it even bigger and maybe outside of the Fringe Fest and make it its own event and have other artists come in from out of town.”

People really took note of Estrada’s etching ability after it was pounded to the ground with construction equipment and he’s recently done demonstrations with Art Zone at the University Museum, Oxford High School and for the Girl Scouts.

UM’s sociology department wants some of his prints at the school this month. He’s downsizing the pieces so they can be put on display easier.

“They want the pieces I did for my senior thesis, which dealt with immigration and other sociological issues,” he said.

Also, some friends want him to come to do print-making demonstrations in Clarksdale and Hattiesburg.

To help with the travel and expense, he has his eyes on a Mississippi Arts Commission grant.

“Hopefully this coming March I am going to try to apply for a grant for $5,000,” he said. “That way I can do other stuff like that and be able to bring in other artists in case they can’t find gas money or accommodations.”

It’s this community participation and involvement, particularly with other artists, that is what Estrada loves most about his craft.

“I enjoy just having the print-making community, how everybody’s involved or has insights. They help each other out,” he said. “I have people on Facebook that sometimes I haven’t even met in person add me just because we have mutual friends as far as other print-makers. When we get the chance we want to go to print-making events. I’ve been to one in Milwaukee, New Orleans and Kennesaw, Georgia.”

He said he likes meeting all the new people and bringing home new artwork for his walls to inspire him.

“I say I need to be like that guy,” when looking at others’ art on his walls. “If you look at some of this stuff it’s out of this world or somewhere I want to be.”

He plans to attend an upcoming print-making conference in Atlanta with the Southern Graphics Council International and learn more.

“That’s where the big-time print-makers show up to do demonstrations,” he said. “People show off their innovations. Any new techniques, safer ways to clean up shops, greener ways as far as things like that, no more chemicals.”

Estrada’s next step is to gradually start doing more portraits. He’s done some pets and is eager to get more people on his etching press.

“I want to move towards capturing people’s emotions and things like that and hopefully their face will tell a story,” he said.

He’s done a lot of work with images from the Mexican culture, a shout out to his roots with parents from Mexico, but now his goal is to set himself apart from the rest.

“When I look at things from Latino artists I see them and I say I don’t want to be like them — I have to set myself apart,” he said.