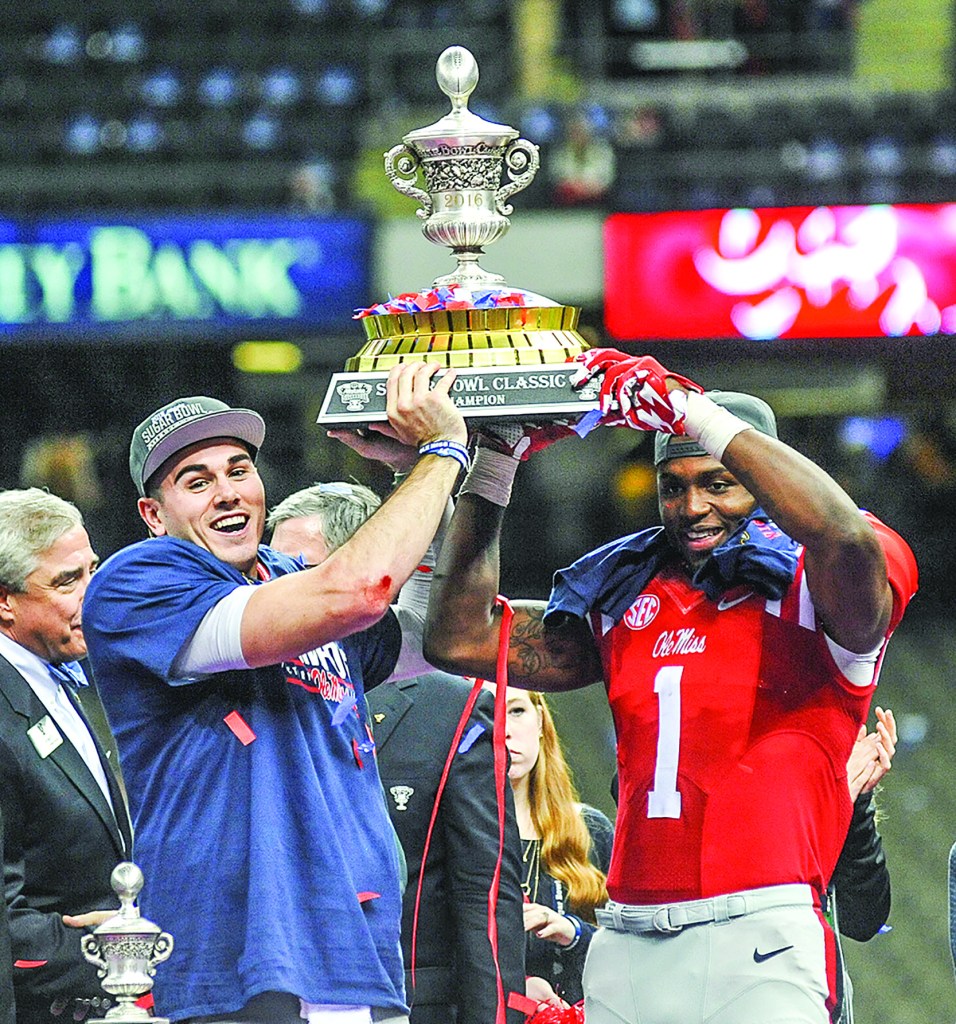 NEW ORLEANS — “Should I stay or should I go?”

If Chad Kelly, Laquon Treadwell and Laremy Tunsil are fans of The Clash, then they should be familiar with those lyrics and will ring close to their hearts. If not, it is still a question they, their teammates and coaches as well as the NFL want to hear an answer to as soon as possible.

For Ole Miss fans, they may want it even sooner.

Once the confetti hit the ground and the celebration from winning the Sugar Bowl was over Friday night, all three were all asked the same question regarding their collegiate and NFL futures.
All three had the same answer.

“I’m going to speak with my family and make the right decision,” Kelly said. “I love this university, and I love my coaches and players.”

During the trophy presentation, Ole Miss fans chanted “One more year” toward Treadwell, but the sentiment could’ve been directed at Kelly and Tunsil as well.

Tunsil is the most likely of the three that NFL draft experts expect to announce that he will be playing on Sundays next season as a potential top first-round pick, but he’s still mum on his official plans, though those plans could be made public sooner rather than later.

“I’m going to make my decision probably next week,” Tunsil said. “I’m going to talk with my family and see where it goes from there.”

Treadwell is the one who is still the most undecided with factors on both sides making his decision the hardest of all. The junior receiver had a career year but tweeted out a cryptic message that read, “2016…” during the week leading up to the game, causing even more speculation.

“Rebel Nation has always supported us and been with us through tough times,” Treadwell said. “Being injured a year ago and coming back and getting the ‘One more year’ chant was a blessing. I really don’t know how to explain it. I probably haven’t grasped it yet, but it was really big.”

Touchdown for Tunsil
In what could possibly have been a farewell and a thank you to the fans all rolled into one was a play that involved Tunsil scoring his first touchdown as a Rebel.

In the final seconds of the first half, Kelly rolled to his right then turned to throw back to his left to a wide-open Tunsil, who ran in from 2 yards out. It was his first catch in a football game of any level that he can remember and a play that has been in the works for some time.

“That play is very special,” Tunsil said. “When we got on the 5 (yard line), I gave coach Freeze that look and said, ‘Why don’t we call it on the 5?’ He did, and it was a very special play. … I was little bit nervous (when the ball was in the air). I had some butterflies.”

Engram’s big day
Tight end Evan Engram announced his plans to return for his senior season earlier this month. Knowing his future plans were already solidified helped him be at ease leading up to the Sugar Bowl.

It paid off as Engram had one of his best games of the season. The junior had a team-high 96 yards on six catches and wreaked havoc on the Oklahoma State defense in the middle of the field.

His longest was a 28-yard catch in the first quarter when he was falling to the ground and secured the ball with one hand.

“It lifted off a lot of stress,” Engram said. “It was a huge decision for my family and I. Just knowing I was going to be back another year and just lifting off that stress definitely let me be a little more free.”

Extra Points
It is the first 10-win season for Ole Miss since the 2003 season when the Rebels beat Oklahoma State in the Cotton Bowl for the 10th win that year … Ole Miss is now 6-3 all-time in Sugar Bowls … Kelly’s four touchdown passes tied the Sugar Bowl record and were the most ever by an Ole Miss player in a bowl game.