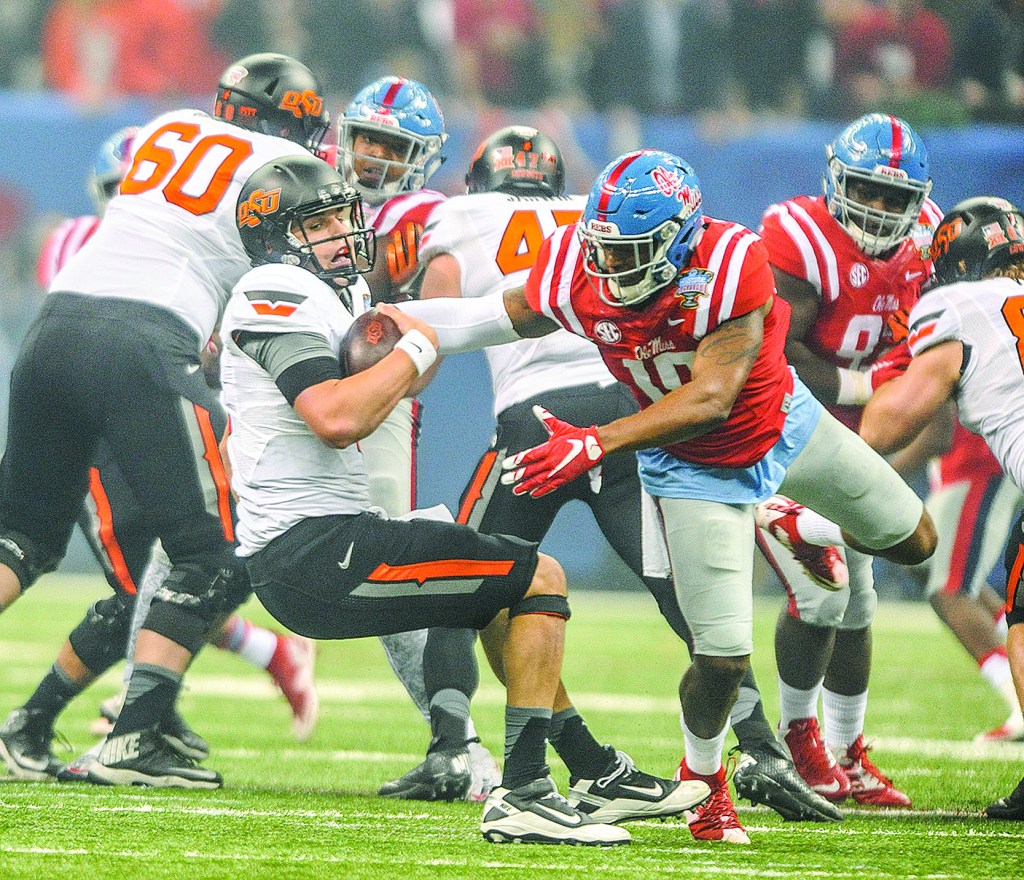 NEW ORLEANS — It was a battle of top offenses. It was supposed to be a shootout.

Ole Miss held its end of the bargain up and made sure Oklahoma State could not.

In a lopsided 48-20 Sugar Bowl victory, the Rebels’ defense stymied Oklahoma State to the point where offensive lineman Laremy Tunsil had more rushing yards and touchdowns than the Cowboys did as a team at halftime.

Quarterbacks Mason Rudolph and J.W. Walsh both tried to find anything to get Oklahoma State going. Walsh had some success in the fourth quarter with his feet once the game was out of hand, but for the most part, the Cowboys had very little to write back home to Stillwater about.

Rudolph went 18-for-31 for 179 yards while Walsh was 9 of 14 for 124 yards and ran for two touchdowns and 74 yards on 10 carries. Oklahoma State came in ranked in the top 11 nationally in scoring offense and passing offense.

“We were locked in,” Ole Miss defensive back Tony Bridges said.

The running game has been an area of inconsistency for Oklahoma State all season, and Friday night proved to be no different. The Cowboys rushed for 63 yards on 30 carries and had a loss of 27 yards. At halftime, Oklahoma State had minus-11 yards rushing while Tunsil had two yards and a touchdown.

“I think any time you get a throwing team like that and you can stop the run, for some reason, it shuts them down,” defensive coordinator Dave Wommack said. “I was really proud of our kids. I thought especially those first three quarters, we got after it good.”

Oklahoma State got inside the Rebels’ 10-yard line a couple times in the first two quarters, but all the Cowboys could muster were two field goals at a time when Ole Miss’ offense was coming away with touchdowns.

Part of the red-zone defense success was the pressure the Rebels were able to get on Rudolph early, rushing only three men at times and coming away with three sacks overall. C.J. Johnson, D.J. Jones and Marquis Haynes all recorded at least half a sack.

“Coach (Hugh) Freeze wanted us to set the tone,” Johnson said. “He just told us he wanted to get everything out of us. So I just came the first day (of bowl practice), me, Mike (Hilton) and Trae (Elston) and we just tried to set the tone for everybody else and we prepared like that the whole time. Here and at home, and it showed (Friday).”

In replacing Robert Nkemdiche, defensive tackles Breeland Speaks and Jones worked by committee with Speaks earning the start. The duo combined for seven tackles with Jones earning five and a sack for a 7-yard loss. Speaks had a fumble recovery.