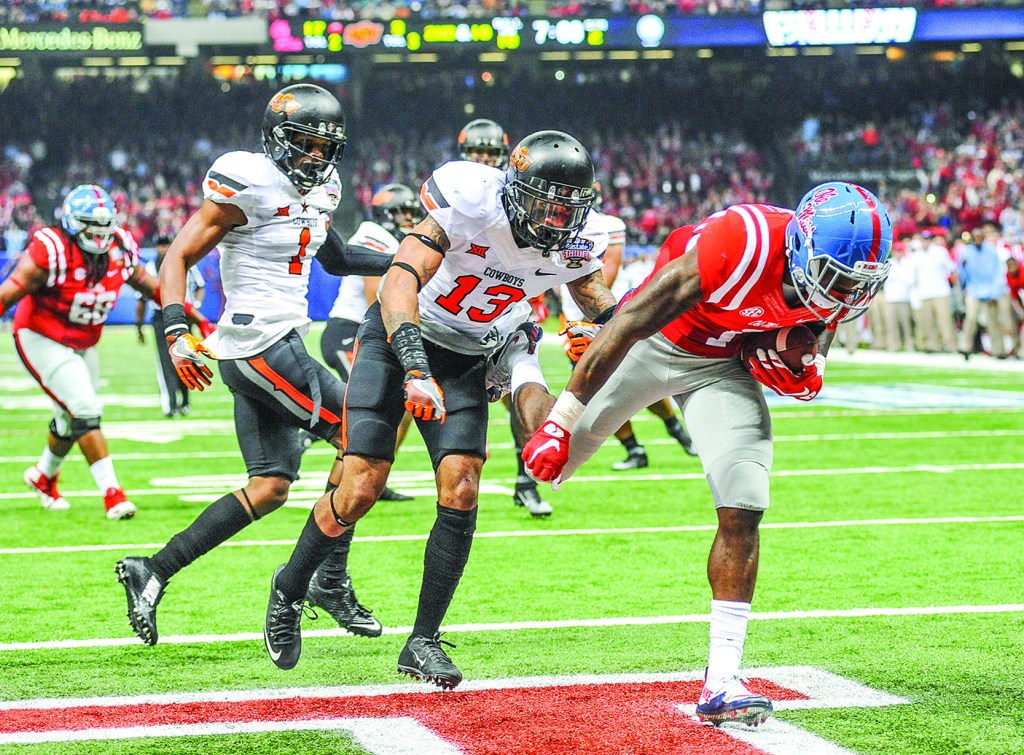 NEW ORLEANS — Ole Miss was on a mission.

Barely a year after being run out of the Georgia Dome by TCU in the Peach Bowl, the Rebels, win or lose in their second straight New Year’s Six bowl, knew they couldn’t perform like that again. Head coach Hugh Freeze constantly reminded his players.

“He got on us day one (of bowl practice) and let us know it was going to be different this year,” said wideout Laquon Treadwell, who watched last year’s beatdown from the sideline.

Different was one word for it.

Chad Kelly threw for 302 yards and four touchdowns, Treadwell caught three touchdown passes in what was likely his final college game, and No. 12 Ole Miss avenged that ugly postseason showing with a 48-20 rout of Oklahoma State in the Allstate Sugar Bowl on Friday at the Mercedes-Benz Superdome.

Ole Miss (10-3) scored 27 unanswered points in the first half to take control and nearly doubled Oklahoma State (10-3) in total yards (554-366) to put the finishing touches on its first 10-win season since 2003. Ole Miss won five of its last six games after a mid-October loss at Memphis and rode the momentum of wins over rivals LSU and Mississippi State to its sixth Sugar Bowl victory.

“Not many teams in Ole Miss history have done it,” senior linebacker C.J. Johnson said. “For us to go out on top and win the Sugar Bowl, the Egg Bowl and the Magnolia Bowl, man, it’s just special.”

Delivering the dagger
Kelly, who was named the game’s Most Outstanding Player, turned in his eighth 300-yard passing game of the season and also added a team-high 73 yards on the ground as the Rebels’ firepower overwhelmed the 16th-ranked Cowboys. Ole Miss scored on five straight possessions to build a 27-6 lead late in the first half before the Rebels delivered the kill shot as time ran out on the second quarter.

With 5 seconds left and Ole Miss at Oklahoma State’s 2-yard line, the Rebels kept their offense on the field and further strengthened their hold on the Cowboys when Kelly brought the defense with him on a rollout to his right before stopping to throw back across the field to offensive lineman Laremy Tunsil, who walked into the end zone to put Ole Miss up four scores at the break and well on its way to a convincing win.

“You study film, you play the percentages, and we felt comfortable with the lead we had at that moment and really thought that could be somewhat of a dagger to end the first half,” Freeze said. “You have a gut feeling every now and then.”

Oklahoma State didn’t get any closer than 28 with the Rebels, even without star defensive tackle Robert Nkemdiche, suffocating an offense that was averaging more than 41 points a game coming in. Oklahoma State quarterback J.W. Walsh ran for touchdowns of 2 and 8 yards in the second half.

Walsh and starter Mason Rudolph combined to throw for 303 yards, but the Cowboys were far too one-dimensional. Oklahoma State mustered just 63 rushing yards and had minus-11 on the ground at one point in the second half as the Rebels notched 12 tackles for loss.

“We had no doubt that if we stopped the ball, they couldn’t win,” defensive tackle D.J. Jones said.

Jordan Wilkins ripped off a 36-yard touchdown run in the third quarter to give Ole Miss its biggest lead at 41-6, and the Rebels answered Walsh’s first scoring run with Treadwell’s final touchdown grab — a 14-yarder early in the fourth.

“We went out and executed,” Kelly said.

Cody Core hauled in a 31-yard pass on Ole Miss’ third possession to give the Rebels a 10-3 lead before Kelly and Treadwell went to work. Treadwell ended the Rebels’ ensuing drive in style, fending off cornerback Kevin Peterson to haul in a 34-yard touchdown with one hand, before snagging a 10-yard score with 6:58 left in the second quarter to start the onslaught.

“We just made plays out here tonight,” Treadwell said. “It was a fun game and just a wonderful experience overall. The fans were here. It was a big one for Rebel Nation.”