OUT WITH A BANG: Sisk’s buzzer-beater lifts Rebels past Vandy in Tad Pad finale 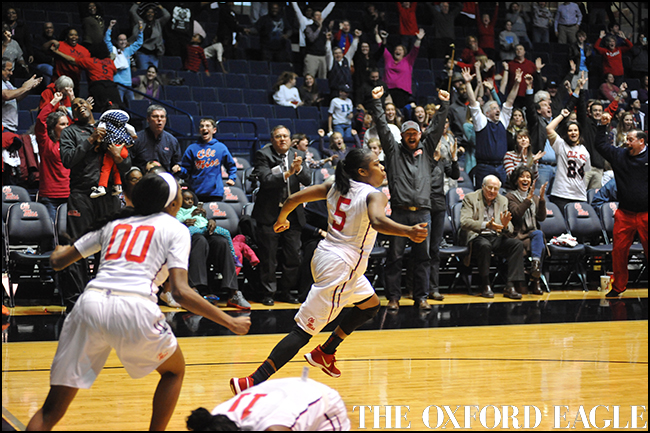 Ole Miss guard Erika Sisk (5) celebrates her game winning shot with 1.5 seconds remaining that gave the Rebels the lead at the C.M. "Tad" Smith Coliseum in Oxford, Miss. on Sunday, January 3, 2016. Ole Miss rallied from 12 points down in the final quarter to win 55-52 in the last basketball game at the coliseum.

While the men’s team was able to end its time at the arena with an overtime win on Dec. 22, the women did not want to be outdone as Erika Sisk hit a layup and free throw with 1.4 seconds left to clinch a 55-52 win over Vanderbilt in the Southeastern Conference opener for both teams.

For Sisk, an Oxford native, this game had special meaning for her as she grew up watching former Ole Miss star Armintie Price and aspired to play like her.

Sunday afternoon may have solidified herself as a Rebel star much like Price.

“It was huge,” Sisk said. “We’ve been talking about this is the last game in the Tad. A lot of great players, Peggie (Gillom), Armintie, Jennifer (Gillom). A lot of players came through and put blood, sweat and tears in this coliseum.”

Insell had been talking about Sunday all during the non-conference slate, stating those 13 games were getting his team prepared for the games that truly mattered.

The Rebels (9-5, 1-0 SEC) struggled out of the gate, turning the ball over four times in the first six minutes and letting Vanderbilt (11-3, 0-1) take advantage for an early lead.

Bretta Hart was the bright spot for Ole Miss in the first half, hitting all four of her shots and leading the team with eight points after the first 20 minutes of play to help the Rebels only trail Vanderbilt by nine points at the break.

“Bretta Hart kept us in it in the first half,” Insell said. “When we had nothing going, Bretta Hart just kept going.”

Fouls plagued Ole Miss all afternoon as the Rebels piled them up while Vanderbilt rarely heard a whistle blown on it. The Rebels picked up 22 team fouls while the Commodores were called for 16.

The lack of Vanderbilt fouls meant a lack of presence at the free-throw line for Ole Miss. The Rebels went 8 of 12 at the charity stripe while Vanderbilt was 13 of 18.

Even though the Commodores had more trips for free points, Ole Miss managed to keep things close the entire game. Vanderbilt’s largest lead was 12 points at the 7:03 mark of the fourth quarter with the Rebels keeping the deficit to under double digits the majority of the game.

Before Sisk’s game-winner, Ole Miss’ 4-2 lead at 9:47 in the first quarter was the only time the Rebels were ahead all game.

Storming back
The comeback began at the seven-minute mark with Vanderbilt holding a 47-35 lead. The Rebels used a 20-5 run to close out the game that included making five of their last seven shots and had clutch free throws from Shequila Joseph, Hart and Shandricka Sessom.

Joseph’s two free throws with three seconds left tied the game at 52-all.

The win was sealed when Sisk hit a layup with 1.4 seconds remaining after a defensive stop by the Rebels. She nailed the following free-throw attempt for the final margin.

“Toughness,” Sisk said of her team’s play down the stretch. “We knew we wanted to win. We don’t want to go in 0-1, we want to go 1-0 and we all came together as a team. We didn’t care about being tired. I’m cramping, but I didn’t care. It’s a team thing.”

Sisk finished with a team-high 18 points followed by Sessom and Joseph, who each had 12 points.

Ole Miss will look to carry its momentum into Baton Rouge, Louisiana, when the Rebels travel to play LSU Thursday at 7:30 p.m.