THREE AND OUT: Treadwell starts ‘dream,’ heads to NFL 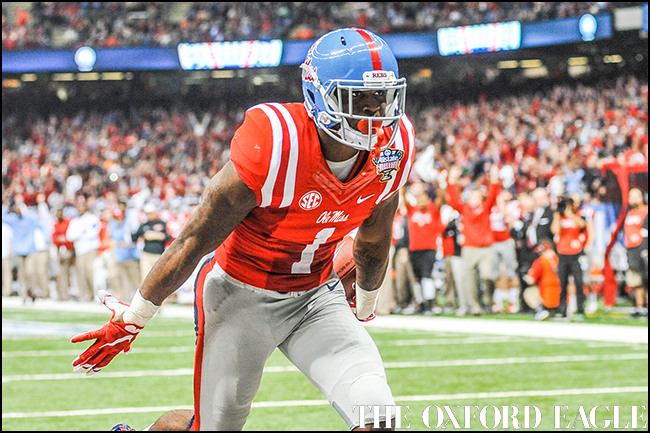 As Laquon Treadwell made his way to the podium for the Sugar Bowl trophy presentation Friday following the Rebels’ 48-20 victory over Oklahoma State in New Orleans, the Ole Miss fans packed inside the Mercedes-Benz Superdome serenaded the junior wideout with a chant of “One more year.”

It was a longshot, but they had to at least try.

As expected, Treadwell officially announced Monday that he will skip his senior season and enter the 2016 NFL Draft. Treadwell is widely projected to be the first receiver taken when the draft begins in Chicago on April 28.

“After sitting down with my family, we have decided it is time for me to take the next step in my career and enter the 2016 NFL Draft,” Treadwell said in a statement. “It’s always been a dream of mine to play in the NFL, and I can’t thank my teammates, coaches and our great fans enough for their unbelievable support since the first day I stepped foot on campus. No matter how far life may take us, I will always be an Ole Miss Rebel. God bless.”

Record setter
The 6-foot-2, 212-pound Treadwell leaves Ole Miss as the most accomplished wideout in school history. Bouncing back from a gruesome leg injury that cut his sophomore season short, Treadwell was the Southeastern Conference’s leading receiver this fall, setting single-season school records for catches (82), receiving yards (1,153) and touchdown receptions (11).

One of the headliners of the Rebels’ 2013 recruiting class, Treadwell also had five straight 100-yard receiving games this season and six consecutive games with a touchdown catch, both school records. He was a finalist for the Biletnikoff Award, which annually goes to the nation’s most outstanding receiver, and finished his career as the school’s all-time receptions leader with 202 catches.

The Crete, Illinois, native will leave with 12 school records in all.

“It was an honor to have coached Laquon, and our family will miss him greatly,” Ole Miss coach Hugh Freeze said in a statement. “The commitment that he and others in his class made to our program three years ago has changed the culture of Ole Miss. I’m so proud of what he accomplished here, and I look forward to seeing him continue to grow and shine as a player and a person.”

Treadwell capped his career with six catches for 71 yards and three touchdowns in the bowl game. Those three scoring grabs tied a Sugar Bowl record as Treadwell helped Ole Miss claim its first Sugar Bowl win since 1970 and its first 10-win season since 2003.

“It’s huge for the program most importantly,” Treadwell said after the game. “All the guys bought in to this.”

Treadwell is widely predicted to go in the first round of next year’s draft and is projected to go as high as No. 4 overall to the Dallas Cowboys by nfldraftscout.com.