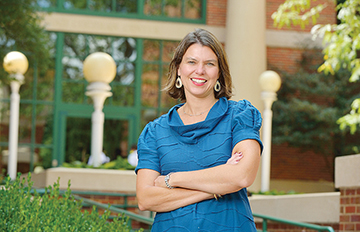 A department chair and professor at the University of Mississippi Pharmacy School has been recognized for being a part of a national effort to improve pharmacy practices.

Donna West-Strum was instrumental in creating the Educating Pharmacists in Quality program. The program was selected as the 2015 Duncan Neuhauser Award winner by the Academy for Healthcare Improvement due to the impact the program has had on the community and students.

So far, more than 65,000 people around the world have downloaded the program for continuing education in pharmacy.

West-Strum said the most rewarding aspect of the years she spent developing and overseeing the program was knowing it helps people, and she said it is nice to be recognized for passion and dedication to improving pharmacy quality.

The program is used as a tool to improve the teaching of West-Strum’s own class as well as other pharmacists, pharmacy students and other health care providers. It improves the practices of measuring and reporting for pharmaceutical aspects.

West-Strum created the training program in partnership with the Pharmacy Quality Alliance and along with other pharmacy researchers from across the nation. She worked with EPIQ co-authors Terri Warholak of the University of Arizona, Vibhuti Arya of St. John’s University College of Pharmacy and Health Sciences, Ana Hincapie of the University of Cincinnati and David Holdford of Virginia Commonwealth.

John Bentley, professor of pharmacy administration, said the award solidifies West-Strum’s reputation as a national expert in the area of quality and medication safety.

“It’s not just a pharmacy award,” Bentley said. He said it is about making the right decisions in health care.

Warholak said West-Strum was instrumental with content of the program.

“She was both fun to work with as well as an expert in what she does,” Warholak said.

Since the development and implementation of the program as early as 2008, there have been significant updates with power points, audio and digital revamping.

“Keeping it up to date is the challenge,” West-Strum said.

The newest version was launched in 2014.