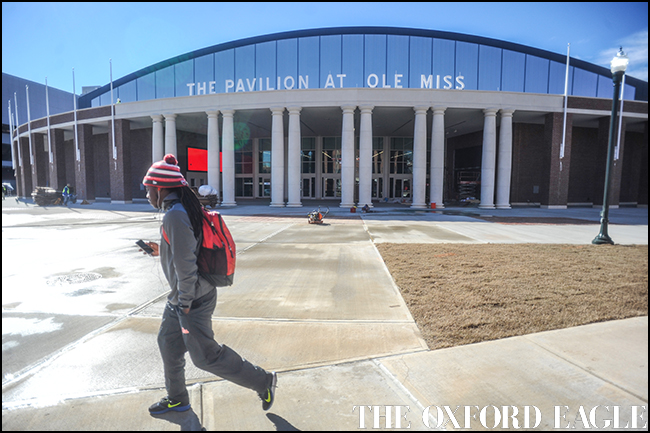 A man walks past The Pavilion at Ole Miss, under construction at the University of Mississippi, in Oxford, Miss. on Wednesday, January 6, 2016. After years of playing in one of the Southeastern Conference’s most outdated facilities, Mississippi will play the first game in its $96.5 million new arena on Thursday, January 7, 2016. (AP Photo/Oxford Eagle, Bruce Newman)

Andy Kennedy will coach his 320th game at Ole Miss when the men’s basketball team hosts Alabama tonight in its Southeastern Conference home opener, but for the Rebels’ all-time winningest coach, it feels like he’s starting all over.

“Honestly, walking in this building, I feel like it’s my first game. That’s the truth,” Kennedy said while holding court with members of the media for the first time in the Pavilion at Ole Miss. “That’s how I feel. Just super excited about, ‘Wow, I can’t believe this is actually happening.’”

The matchup will usher in a new era of Ole Miss hoops as the team moves from C.M. “Tad” Smith Coliseum to play the first game ever at the Pavilion against the Crimson Tide (8 p.m., ESPNU). Ole Miss had a shootaround in its new home for the first time Monday and held its first full-scale practice there Tuesday in preparation for the first on-campus game to be played outside of Tad Smith Coliseum in half a century.

“(Monday) when they had the court set up, the baskets up and the lights going, it was surreal to me that honestly the vision has come to reality,” Kennedy said. “There’s so many people who have been involved in making that happen.

“(Tonight) is the start of a new chapter in Ole Miss basketball. This is a complete gamechanger.”

Kennedy knows there will be plenty of gawking by his staff, his players and fans once they step inside the $96.5-million, 9,500-seat arena. He said even he was “blown away by how nice the facility is” while he “cannot wait for our fans to walk in.”

But there’s also business to tend to as the Rebels (10-3, 0-1 SEC) try to notch their first SEC win after getting trounced in an 83-61 loss at Kentucky over the weekend. Alabama (9-3), which will be playing its first league game, has won seven of its last eight games under first-year coach Avery Johnson.

The Crimson Tide are getting 13.4 points a game from guard Retin Obasohan and 11.7 from forward Shannon Hale, but they’re last in the SEC in rebounding (34.5 rebounds per game) and scoring (66.4 points). Their success starts on the defensive end of the floor where Alabama is limiting opponents to less than 39 percent shooting from the field.

It’s helped the Tide get notable wins over Wichita State and Notre Dame, a pair of top-100 RPI teams, and push themselves to No. 53 in the NCAA’s latest RPI rankings. The trip to Kentucky started a stretch of five top-70 RPI opponents in six games for the Rebels, who have just one top-100 RPI victory.

“We’ve got to get better offensively because defensively we’re going to have some issues as it relates to size and bulk along our front line,” Kennedy said. “We knew that.”

Kennedy said there’s still time for his team to catch an offensive rhythm, and he’s hoping it comes up with enough points tonight to keep the good vibes of a historical night going.

“Obviously the first game in this building will be remembered 50 years from now, and we certainly hope that it goes in the right column,” Kennedy said.