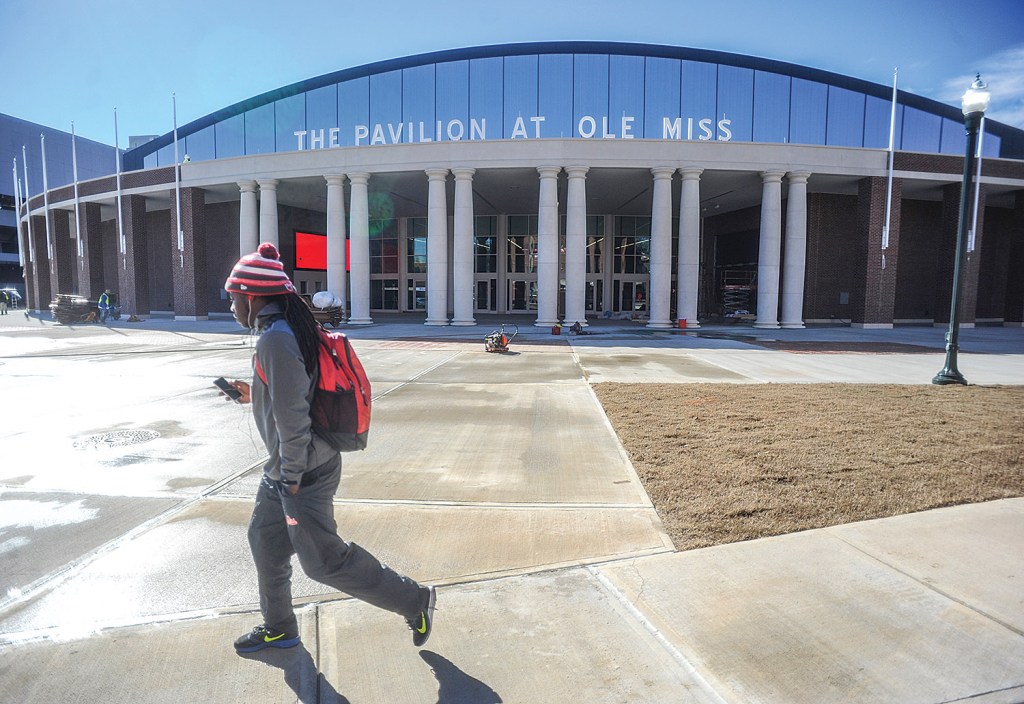 A man walks past The Pavilion at Ole Miss, under construction at the University of Mississippi, in Oxford, Miss. on Wednesday, January 6, 2016. After years of playing in one of the Southeastern Conference’s most outdated facilities, Ole Miss will play the first game in its $96.5-million new arena on Thursday, January 7, 2016. (AP Photo/Oxford Eagle, Bruce Newman)

When the Ole Miss men’s basketball team brought in recruits for visits in recent years, rarely did head coach Andy Kennedy take them to see the building they would actually be playing in if they chose to sign with the Rebels.

Instead, Kennedy would try to show off the much younger Tuohy Basketball Center, the Rebels’ practice facility that opened in 2010 — 44 years after C.M. “Tad” Smith Coliseum.

That wasn’t by accident.

“It really doesn’t matter where you play the games,” Kennedy said with a smile. “We took that approach. You always take the approach that’s in your best interest. Ah, it’s just a gameday facility, who really cares?”

But Kennedy said “that conversation will change now” with the Rebels’ move to the Pavilion at Ole Miss, which will host its first game tonight. Kennedy said he expects to have more recruits on campus tonight and Saturday when Ole Miss hosts Georgia than any other game in his 10 years at the helm.

“That’s not by accident, that’s by design,” he said.

Before the women’s team played the final game at Tad Smith Coliseum on Sunday, the facility was the third-oldest basketball venue in the Southeastern Conference and anything but a recruiting tool. Kennedy, without mentioning any names, firmly believes the run-down arena has made the difference in winning and losing some recruiting battles over the years and made the Rebels a non-factor with some of the elite prospects they targeted.

“We’ve got everything that you need to be successful, and it puts us in the game,” Kennedy said.

Greater expectations
The recruiting prowess of some of the SEC’s newest coaches — Auburn’s Bruce Pearl, Mississippi State’s Ben Howland and Alabama’s Avery Johnson to name a few — has helped elevate the league’s profile as of late. Kennedy, who’s done his part by getting the Rebels to the NCAA Tournament twice in the last three years, is counting on the Rebels’ new $96.5-million home to also help infuse his program with a different level of talent in the future.

“Now — and I’m challenging our staff — our vision has to increase because now we have a realistic chance that quite frankly we did not have before,” Kennedy said.