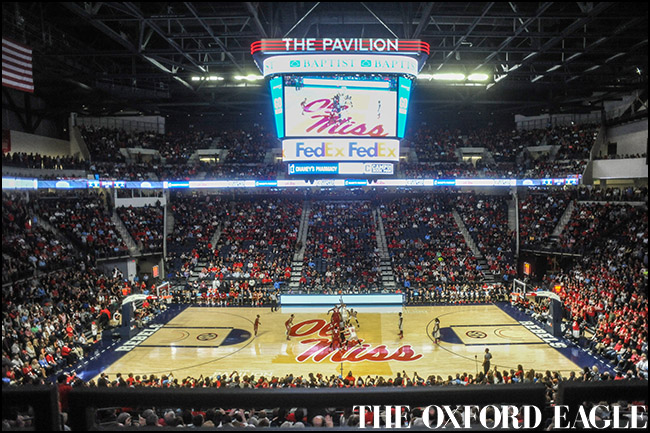 Ole Miss forward Sebastian Saiz (11) and Alabama forward Jimmie Taylor (10) jump against each other in the opening tip at The Pavilion at Ole Miss on Thursday, January 7, 2016. The game is the first in the new $96.5 million arena. (AP Photo/Oxford Eagle, Bruce Newman)

Andy Kennedy eventually walked off the shiny new hardwood and celebrated with his team, but Ole Miss’ coach had something he wanted to say first.

Kennedy grabbed a microphone once the final second ticked away on a night the program has long been waiting for and addressed the largest crowd to ever watch a home basketball game at Ole Miss inside the team’s new $96.5-million digs.

There was plenty to go around Thursday night.

Stefan Moody scored more than 20 points for the ninth straight game, Sebastian Saiz recorded his seventh career double-double, and Ole Miss rallied for a 74-66 win over Alabama in the first game ever played at The Pavilion.

Ole Miss (11-3, 1-1 Southeastern Conference) trailed 40-32 at the break but shot 50 percent from the field in the final 20 minutes to get its first SEC win. Moody and Saiz each had 21 points for the Rebels while Saiz also pulled down 16 rebounds.

“Last year, we liked to play better on the road than at home because the energy at home, it wasn’t really good,” Saiz said. “But this is awesome though.”

Tomasz Gielo added 12 points while Rasheed Brooks chipped in 10 for the Rebels, who won their third straight over the Crimson Tide (9-4, 0-1). Retin Obasohan scored a game-high 23 points for Alabama while Arthur Edwards followed with 17.

Alabama got within two at 65-63 on a pair of free throws from Michael Kessens with 2:59 left, but Ole Miss outscored the Tide 9-3 the rest of the way. Seven of those points came from the free-throw line with Moody, who finished 13 of 16 from the charity stripe, making five of them to help the Rebels seal it.

Ole Miss held Alabama to 39 percent shooting in the second half, and the Tide made just two of their final 12 attempts from 3-point range after knocking down seven of their first 13 shots from beyond the arc. Edwards was 4 of 5 from deep in the first half but only got up one shot in the second.

The Rebels forced 19 turnovers and cashed in on their extra possessions by attacking an Alabama defense that spent most of the night sending two defenders at Moody to try to get the ball out of the hands of the league’s top scorer. Ole Miss eventually started taking advantage of the numbers, scoring 42 points in the second half and 24 off takeaways.

“My math’s not great, but if they’ve got 2 on 1 and we can get it out of that, we can play 4 on 3 and let’s go,” Kennedy said. “But we were catching it and throwing it right back to allow them to reset. I thought we did a better job of that going down the stretch.”

Saiz was often the beneficiary down low, scoring 12 of his points and grabbing eight of his boards in the second half.

“We’ve never had a game like this at Ole Miss. This has never happened,” Kennedy said. “I actually saw students running to the game, not away from the game. This is historic, and so I did not want to let (the fans) down. I would’ve felt terrible if we wouldn’t have got it done.”