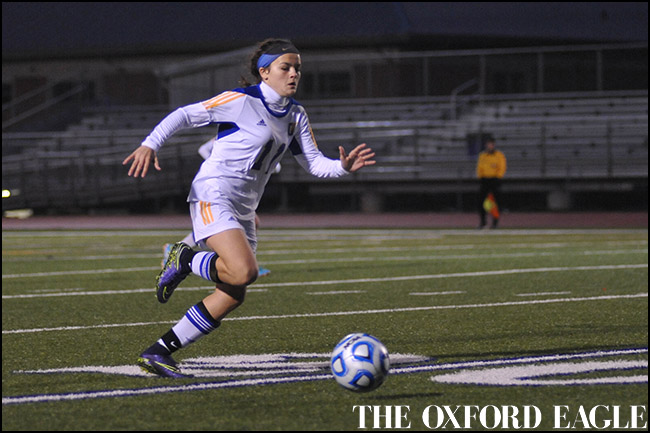 The Oxford High girls soccer team is warming up as the temperatures outside are getting colder, and they are peaking at the right time.

The Chargers defeated the visiting Center Hill Mustangs 5-1 at a soggy Bobby Holcomb Field Thursday evening. It was Oxford’s fifth win in a row and sixth win in their last seven matches.

The scoring got started early with an own goal by Center Hill off a pass from Madisyn Longnecker, who was credited with the score, in the third minute of play. Eleven minutes later, Morgan O’Connor added to the scoring with a 15-yard shot to give Oxford (11-4) an early 2-0 lead. O’Connor earned her second goal of the night off a penalty kick midway through the first half.

“(Center Hill) is a good team. We’re going to see them in the playoffs,” Oxford coach Hunter Crane said. “They’ve beaten a lot of quality teams, and we were excited to come out here and we jumped on them early. I wasn’t really expecting to jump out on them as quickly as we did. We played Tuesday against Southaven and looked a little sluggish, had a little Christmas break hangover. Today we got back to playing Oxford soccer.”

Oxford had to withstand a very short-lived attack by the Mustangs in the early stages of each half but was able to dictate possession the rest of the match, staying in Center Hill’s (14-4) side of the field. The defense has been a strong point of Crane’s team since before the holiday break with five shutouts in the past seven games. Two of the shutouts occurred during the annual Oxford Showcase against Starkville and Horn Lake last month.

As region play begins Saturday with a pair of road matches at New Hope and West Point, the Chargers are trending in the right direction.

“They are just getting comfortable,” Crane said of his defenders. “We’re playing a flat back, and that’s a little different than what they’ve normally done but they’re getting comfortable with the system. … I’m really excited about where we’re at right now. We didn’t want the team to peak real early, and I think we’re peaking at the right time and you’re starting to see everything click together and be real good, nice and pretty.”

Anna Dennis scored her lone goal of the night in the 23rd minute while Katelyn Rock added one late in the first half. Center Hill got on the board with a goal scored by Madalyn Brown in the 70th minute off a corner kick.

Chargers’ best performance
It may have been a lopsided loss to Southaven on Tuesday, but Oxford boys coach Jonathan Branch felt he saw something in what he described as being “as proud as he could be” with a 5-1 loss.

Whatever it was he saw in his team, it showed up Thursday night in a 3-1 win over Center Hill.

“Right then, I was feeling like we were about to come out of this,” Branch said of the Southaven game. “(Thursday) right from the whistle, that was the best 40 minutes I’ve seen us play. That was just pure domination on our part. That first half, that just woke us up and that’s what I know we can be. I got really excited.”

The dominance started early with a goal from John Owen Yoste in the 10th minute to give Oxford (9-7-1) the 1-0 lead. Keaton Calhoun followed with a pair of goals in the 13th and 45th minutes.

The match got a little interesting in the second half with the teams getting chippy, resulting in a red-card ejection for the Chargers’ Demircan Usuk. The Mustangs also found the back of the net in the 52nd minute to avoid the shutout.