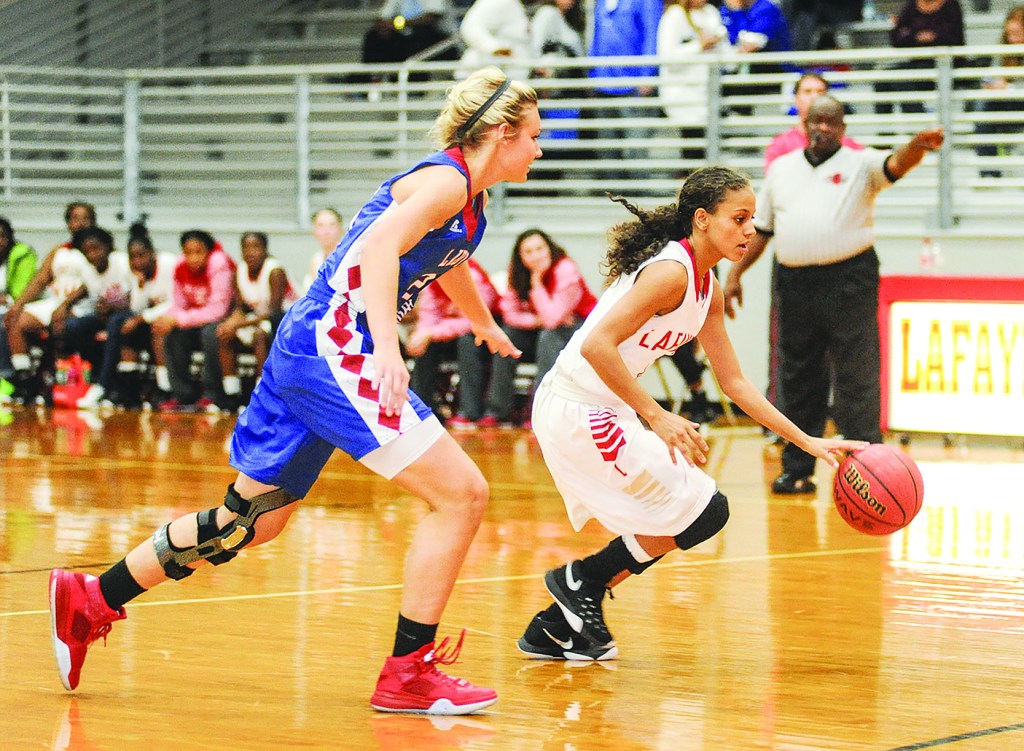 It took nearly two months into the season, but John Sherman watched his team play its best game of the year Saturday afternoon.

The Lafayette boys basketball team fended off a rallying Ingomar not once but twice for a 74-69 win in the Commodore Challenge at the LHS gym.

“That was our best win by far,” Sherman said.

At the start, it did not appear the game would have as dramatic of a finish as it ended up having as Lafayette (4-7) surged ahead for a 21-9 lead over the Falcons after the first eight minutes of play.
Mack Bishop fueled the big quarter, scoring 10 points, while the Commodores took advantage of multiple Ingomar turnovers in the early stage of the game.

Things began to look dicey for Lafayette late in the second quarter. The Commodores were up 38-21 when Ingomar began what would become an 18-0 run over the span of the second and third quarters, scoring 11 of those points in the final minutes of the first half to make it a 38-32 lead for the Commodores at the break.

“(Ingomar ‘s) done that a lot of times. Being down double digits doesn’t shake them,” Sherman said. “They know they can turn it on and make some things happen. … We showed some resiliency. I’m really proud with how they responded all throughout the game.”

The Falcons continued the rally with the first seven points of the second half to take a 39-38 lead, their first of the game. It was short-lived as Lafayette awoke from whatever slumber they fell into during the middle portion of the game.

It was due to Bishop and Quin Jones. Jones was able to penetrate at will, scoring layups or close-range shots. He hit back-to-back shots to end the Ingomar run and finished with 13 points on the evening. Bishop used a monster second half to aid in Jones’ effort, hitting back-to-back 3-pointers in the fourth quarter. He finished with a team-high 23 points.

“If we can get (Jones) down there with the ball, we feel pretty good about it,” Sherman said. “Everybody contributed. We had people coming off the bench. We weren’t in foul trouble, but we subbed to keep from getting in foul trouble and it kind of work.”

Ingomar got as close as 70-69 after another mini-run late, but Lafayette managed to hold on for the victory with timely free throws.

Lady ‘Dores suffer late loss
With region play kicking up next week, Lafayette girls coach Shayne Linzy wanted to see a team that was in midseason form. What he saw instead looked like a team just getting its season underway.

After leading the entire game, the Commodores were unable to hold off a pesky Grenada team as they fell 48-46 in the Commodore Challenge.

Grenada’s Emily Bush hit a 3-point shot as time expired to give the Chargers the win and Lafayette (11-5) a bad taste in its mouth heading into Tuesday’s region matchup at Tunica-Rosa Fort.

“We didn’t play a great game by any means and had every chance to win it, even playing the way we did,” Linzy said. “Bottom line, Grenada at the end had to do the things that they had to do to win it.”

With the game seemingly in hand late, Lafayette kept the pressure on offensively instead of choosing to drain some of the clock, causing the Commodores to make several turnovers that Grenada took advantage of.