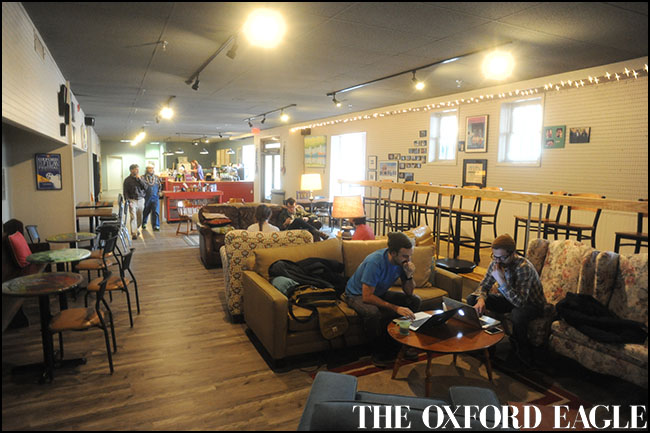 Shelter opened on Monday on Van Buren Avenue on the Square. It will provide an outlet for artists and healthy eating options.

There’s another option on the Square, whether you are looking for coffee, a healthy breakfast option, craft beer, live music before 8 p.m. and more.

Shelter opened Monday on the Square in the space below Neilson’s where the department store used to have its children’s shop.

“Probably in the fall of 2014 I started thinking about it and then approached Will Lewis here in the spring and just said would y’all be interested in a store like this,” Lee Bowie said, “and it’s really neat because when they made the space available they were thinking of something along these lines and it worked out.”

Like Cups, a focus will be on the arts community, whether it is art on the walls, a poetry slam or a music or theater act.

“The great thing about this place and also Cups is there is so much to draw from in Oxford and the arts,” he said. “Obviously you’ve got the university and sports but you’ve also got this vibrant community of artists here — fine arts, obviously, but you’ve also got the writers and musicians and the film festival and Theatre Oxford, and there’s Thacker. There’s a lot of neat things concentrated in this small town that you rarely find in other places — at least not in this combination.”

Bowie said the plan is to work closely with the arts council and provide an alternative venue for events like the Oxford Film Festival and Theatre Oxford. Both are already lined up for upcoming entertainment. The Winter Solstice event Dec. 20 was held at Shelter before it officially opened, and Bowie said it was a packed, happy crowd.

Oxford native Ron Shapiro, who is spearheading the menu, said one thing they are aiming for is to give the older crowd in Oxford something new to do.

“We thought there was a need for people who want to go out and listen to live music and 6 or 7 in the evening, have something to eat and then be home by 8:30 or 9 and we figure we can fill that,” he said. “We’re going to do a lot of jazz, a lot of acoustics, there’s just so much musical talent in the neighborhood. So many bands. A lot of times these band members don’t necessarily want to wait until 11 o’clock to start. They want to start at 7 and then maybe at 11 they can go hear their friends play. We are definitely aiming for people who still want to have as much fun as anybody else but want to be home by 9 o’clock and we’re going to offer that option for the mature crowd.”

As more people hear about Shelter and visit the shop, more food options will be added, and beer from Mississippi breweries will be added when the permit arrives. Hours also will be expanded from the current 7 a.m. to 6 p.m. daily.

“We have a limited menu right now but every day we’re adding a different item until we get things mastered and figure out what works,” Bowie said.

When fully set up, Shelter will offer homemade soups, salads, a vegetable of the day, beans and rice, a juice bar with wheat grass and smoothies with all fruit and no sugar added.

“We’re real conscious about really good ways to eat and want to be known for the things like the beans and rice and vegetables,” Shapiro said. “We will, within the next week or so, will be offering chicken, hopefully we will get locally, and beef brisket.”

Shapiro said the focus throughout the day will be on nutritious food that is a bit different and fairly priced, especially at breakfast.

“We wanted to introduce some things we didn’t think were in town so we’ve pretty much settled on doing a lot of Mexican breakfasts,” he said. “One of the reasons is that 10 percent of the university’s enrollment is from Texas, and they all know about egg tacos and egg burritos, which is very common to them but is new to people here. My thinking it is very nutritious, is not as fatty as most breakfasts and is not as expensive. So that’s why we’re doing a lot of the things with black beans and brown rice.”

While everything throughout the day will be healthy, they will not shortchange folks on dessert.

“We pride ourselves on homemade, deliciously decadent desserts,” Shapiro said. “Everything we’re doing before is so healthy we want to yin-yang out in this world. We have the Hoka cheesecake and fudge pie, which was a mainstay in Oxford in the ’70s through the ’90s, and we have cookies and muffins.”

Look for more in the coming weeks as the shop grows.