Meet the guy in the spandex suit 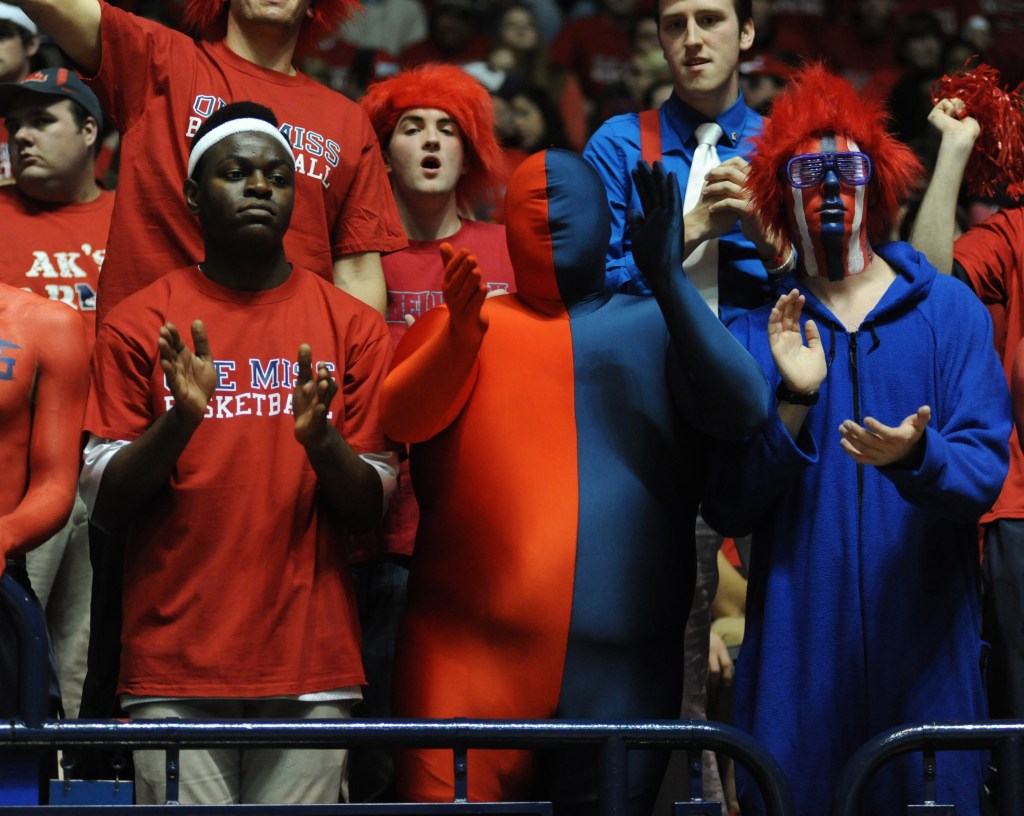 Ole Miss fans, including James Lott in the spandex suit, cheer at the game versus Mississippi State at the C.M. “Tad” Smith Coliseum in Oxford on Jan. 18, 2012. Lott has retired the suit but is still active on the Ole Miss basketball scene and is in the stands when he can be.

Ole Miss basketball fans might notice something different this year other than the new stadium: there’s no spandex guy in the front row.

James Lott, 24, retired his role as spandex guy at the end of the 2014 season, but is still at the games to continue to show support and is proud of the tradition he started.

Lott, now a senior broadcast journalism major, created spandex guy in 2011 when he was pledging his fraternity, Beta Upsilon Chi, as a way to stand out. Dressing in a spandex suit from his feet all the way over his head with half red and half blue colors did the trick.

“It was just simply a way to stand out,” he said. “I never really was much of a social guy in high school so I tried my best to get out of my comfort zone. I figured a red and blue spandex suit that had a face mask on it so no one could see my face would be appropriate, so that way I could actually do something different.”

His inspiration came from two guys that wore neon green in the stands at Vancouver Canucks hockey games. He used their methods of riling up the fans and messing with the opposing team to generate excitement.

He would join his friends in the front row, some who were shirtless and covered in face paint and rev up the crowd.

He especially enjoyed the 2013 season when Ole Miss won the SEC title.

“I met a lot of good people through this,” he said. “I got to really know my fraternity brothers really well and it helped create friendships outside of the fraternity too.” 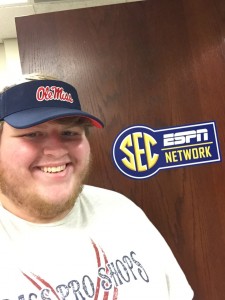 ly how he met his girlfriend, who he has been with for three years.

Now Lott’s job in the production department with University of Mississippi Athletics keeps him busy during the games, so he had to put up the spandex. He works on graphics, replays, stats and more for the television screen for the SEC Network. It’s a job that the Olive Branch native hopes leads to a full-time gig with ESPN after graduation.

But will he put on the spandex again before he graduates?

“Do I want to do it at least one more time? Yes,” he said. “I would love to do it again. If there was one place I could put on that suit, it is if Ole Miss ever went back to the SEC championship game. If they do it this year I will gladly go to the tournament and go put on the suit and go watch them play. Other than that, I like to say that the suit has had its good times and bad times.”

Since he is working instead of donning the suit, Lott became a student ambassador in June 2015 for the Club Red student section and is doing his part to bring people to the stands and promote Ole Miss basketball.

“I love to show my passion for athletics, whether it be Ole Miss or any other team I care about,” he said.

While doing that, he noticed it’s OK he’s not in the suit because others have followed his lead.

“A couple years ago four kids showed up in spandex suits, and I realized I did that. I made my mark,” he said. “I’m trying to do my best to be sure the tradition continues through the next round of students.”